Ohhh, Francis William PETTYGROVE - you're such a large person in your life in Washington Territories, that you completely swamped your wife, Sophia.  I've yet to find anything written about Sophia at all.  She's a mystery.

FW was born 12 Oct 1812, Calais, Washington, Maine, and was apparently quite an adventurer and entrepreneur.  In 1842, he married Sophia ROLAND who was born about 1824 in New York state, and the couple left very shortly thereafter with FW's sister and family; Charlotte "Mary" Pettygrove who was one year older.  She had already married to Philip Foster in 1834, and had 4 children by 1842.  FW brought along about $15,000 worth of merchandise from New York, apparently goods well suited to the wilderness where they were heading.  Philip and Mary became well-known settlers in Oregon, receiving settlers from wagon trains across the nation. 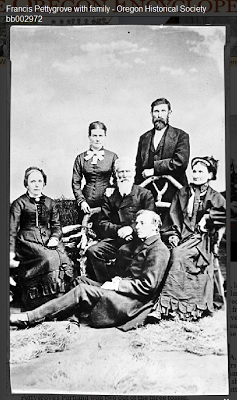 The newly married Pettygroves, along with several other businessmen and adventurers, sailed around to the other side of the continent, stopping in the Sandwich Islands (did you know their old name?), where Sophia delivered their first child, a boy Alfred Benson Pettygrove - named after two partners of FW.   Alfred was born the 3rd of January 1843.  They all remained there for 5 months, arriving near Oregon City, Washington Territories 19 May 1843.  There is much already known about FW's merchandising successes and challenges, both independently as well as with partners: such as about his naming Portland on the toss of a coin with his partner A.J. Lovejoy, and about his various political roles in Port Townsend where the family settled eventually.  Books, booklets, websites, and more provide much details about FW PETTYGROVE -- including about his ivory flute which he brought with him, and carried all the time.

Published by the Oregon Historical Society, the photograph here shows FW the white-haired bearded gentleman in the middle, Sophia sitting on the right side, FW's sister Charlotte Mary Foster on the left. Three of their 7 children are shown here, one would have already died in 1872, and the eldest Alfred died in 1878.  All are buried in Laurel Grove Cemetery in Port Townsend.  Likely the bearded gent standing behind the bench is Benjamin Stark Pettygrove, Sophia McIntyre the woman standing on the left, and Frank W Pettygrove (jr.) sprawled gracefully in front, leaning against his mother's legs.  Can you not see he's clearly the youngest in this family!  I had to smile at this photo.

But about Sophia - I can find nothing written.  I think about her, leaving her family at the age of 20 years, and heading off on a little ship all the way around South America, and up to Hawai'i where she has her first child.  Who helped her? Her sister-in-law, Charlotte Mary, who'd had 4 children by that time?  Was there a doctor in the community where they stopped for more supplies, and changed ships?  What challenging times for women in those days!  Arriving in a place where nothing could be taken for granted in terms of washing, food supply, diapers, illness, clothing, tools, and more.

Every census of the Washington Territories shows that Sophia was born about 1823 in New York state.  But I have no information that there were relatives left there.  Or in Maine.  There are a few newspaper records stating FW was travelling here and there up and down the west coast of the nation, but never a mention of Sophia travelling across the nation or having relatives to visit them in Portland, or Port Townsend.

And the final challenge: when she died, her obituary was all about her husband, "... the wife of FW Pettygrove, the famous ...".  Nothing about her as a woman, as a daughter, as a mother, as a sister.  Nothing at all.  Not a word about her parents and who they might have been, her father's occupation, for example.

I'm still looking, and I certainly need to find a way to get down to the Jefferson Historical Society in Port Townsend and see what they have in their files and on their shelves.  It's rather challenging travelling these days, but perhaps there will be a way to get there this coming year.

And if anyone actually knows anything of Sophia - I'd be delighted to have information shared with me.

I've always loved Christmas stockings - they were always full of such good things, packed tightly into my dad's woolen knee-high work socks - you know the kind? Grey and white wool, in a rib knit, so they were stretchy enough to hold lots of odd bumpy lumpy goodies!  I don't remember now when we shifted over to commercial Christmas stockings... must have been when I was in my teens.


On Christmas eve night, when we went to bed, the three of us carefully put out our stockings by the tree in the living room, and toddled off to bed.  Of course, we were told NOT to come back downstairs until Christmas morning - AFTER 6 a.m.!!

Almost every year, our stockings had the following items:


As you can see we had something to eat, something to puzzle over, something to do, something to try on or wear, and something to read.  And with three of us kids in the family, we would share our books/comics and puzzles back and forth as we struggled to wait until it was time to go downstairs for breakfast.  I'm sure my parents only slept a couple of hours at most!  They would have been up late putting our stockings together, and wrapping all the "Santa" presents to put under the tree.

My sister's birthday was just after New Year's, so we occasionally 'teased' her by giving her only half of her present (if it could be split in two, like a pair of pretty socks, or earrings etc.).  She must have been so frustrated by that, I'm sure!  But at the time, it was simply something we did - not every year, but sometimes...

We left our Christmas tree up until after her birthday, so we only put it up the weekend before Christmas.  That way, we'd keep it moist so it would last without totally drying out.

Ohhh, I remember my brother telling me that one year when he was staying at home for Christmas - he rushed downstairs with his stocking in hand, "Hey, Mom, Dad - Look!! I got a ... " oh yeah. Christmas stocking.  Filled by parents.  Surprise.  Yup.  He was about 20, but still a kid at heart!!

Christmas Stockings - Weren't they fun?  Don't you wish "someone" would make you one for this Christmas?