Sometimes babies don't make it... and they die unexpectedly.

This is a photo of my grandmother's first child, Elizabeth, known as Betty, b. 1 Feb 1911, in New York.  In this photo taken in April 1911, she looks quite healthy and very sweet.

But she died in November 1911 in New York.  My grandmother described the autopsy as showing that she died of "massive intestinal complications from a severe milk allergy".

She went on to have 5 more children after Betty, of whom 2 definitely had milk allergies, plus me in the next generation, and 3 of my 4 children.

The back of the photo is in my grandmother's handwriting:

For Aunt Toto
from "Betty" and her mother.
Taken in Baby's nursery when she was just two months old.

From all the wonderfully helpful links and comments I received from Albert Riezobos in Winnipeg, I decided to add some photos of James M. Terwilliger, and describe him further.  James is the father of James Grover "Grove" Terwilliger, whose Souvenirs Album I am documenting page by page by page over the coming year.  It's big.  And has lots of unusual items, names, calling cards, memorabilia and more.

There are very few photos of  James Sr. - but since the early Album pages show items about Grove's father and friends/colleagues, it seems reasonable to at least give a smidge of information about him.  These are his "official" Senate photos. 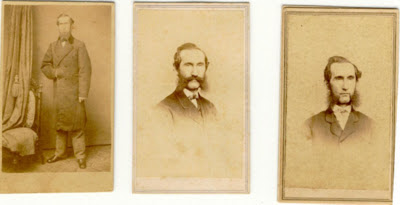 James Sr. was the eldest son of John S(imon) Terwilliger, b. 16 Sep 1800 in New Scotland, Albany, NY.  John married 3 times, firstly to Margaret Reid from Scotland, with whom he had 5 children:  James M., George, Nancy, Jane R., and Mary E.  Margaret died 11 Dec 1838 in DeWitt, Onondaga, NY, about 19 months after the 5th child, and John married secondly to Jane DeGraff/DeGroff, in 1841.  There were 3 girls born this time, Jane, Sara, and Lida; however both Jane and Lida died before 1850, and John's wife Jane also died in 1849.  John married one more time in 1856 to a widow, Harriet M. Ives, with whom there were no more children.  James Terwilliger and his son, Grove, were quite close with their extended family, and there were numerous social events described about visits, picnics, and more.  Sara, the only living stepsister of James Sr., lived with him and his wife for a time.

James M. Terwilliger married Harriet F. Buell in 1851; she was the youngest of 5 (4 girls, 1 boy) of Grover Buell & Charlotte Bortle [a brick wall of mine].  They had two living children, James Grover "Grove" Terwilliger, b. 27 May 1856, and 8 years later, Harry Reid Terwilliger b. 9 Apr 1864 [the Reid from James mother's surname].  Both boys were born in Syracuse where the Terwilligers settled by the time of the 1860 Census.

In 1851, he bought a half-interest in "The Syracuse Journal," as it was known at this time, and was listed as a "publisher" on the 1870 Census for Syracuse.  Although he sold his interest around this time, he repurchased it by 1871.  I am not certain of the reasons for this activity.  The family was relatively wealthy, and enjoyed an active social life, with invitations to social events such as the Ball of the Prince of Wales in October 1860.

He was an active member of the Odd Fellows, and was Grand Secretary of the Grand Lodge from 1884 to 1894.

James Sr. was active in politics both locally, and state-wide.  For example, he was selected to be secretary at the first Republican Convention in 1856, held in Philadelphia.   Earlier he was elected in DeWitt, Onondaga, NY, on the 1847 "Whig Ticket" as well as on the 1848 "Temperance Ticket".    He was also a Clerk of the State Senate (NY), from 1856 to 1860, and the above 3 photographs show him dressed up for his official photographs.  In 1864 he was acting secretary of the Republican National Committee.  He was Deputy Collector for the Port of New York in 1870-1871.  In addition, from 1860-1870, James Sr. was secretary of the NY State Republican Committee.

As stated in several obituaries published the day after his death, he retired from business and official activities in 1893.  And in 1905, he and his wife, Harriet, moved to Roselle, New Jersey, to live with their eldest son, Grove [James Grover Terwilliger] and his wife, Gussie.  James Sr. died 18 Oct 1909 at his son's home, and Harriet died 14 months later 4 Jan 1911, also at her son's home.   Both are buried side by side, in Oakwood Cemetery, in Syracuse, Onondaga, NY.  Their son, Grove, is buried nearby.


(Details above are taken from items in the Terwilliger Souvenirs Album filled out by his son Grove, as well as New York state and federal Censuses, plus newspaper articles in Syracuse and New York, NY.  Thank you Albert for your sluething!)

If you wish further information on any of the above, please do contact me, and I'll be happy to provide whatever information or details I may have.  More about the Souvenirs Album may be found by clicking on the link here   Thanks for reading my blog about this interesting ancestor of mine. 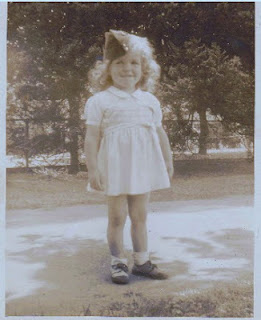 He must have been home briefly on a leave from his work on the radar installation near Halifax N.S.  Thank heavens he didn't go overseas.

After posting on my favourite surname - TERWILLIGER - on Surname Saturday, I decided I simply had to do "something" about my greatgrandfather's Souvenir Album...

A few years ago, I took photos of each of the pages before putting it away carefully - it's quite old and was badly cared for in the past.  Currently it's experiencing benign neglect - at least it's dry, coolish, and put safely away from any moisture.

That made 266 images saved on my computer (and backed up of course), so that I wouldn't need to handle the Album. Each photo has now been looked at, labelled with descriptions, so I know what I might need to see.  BUT, it's now very clear:  I need to do a complete Inventory of this Album, item by item, page by page, photo by photo, dinner menu by dinner menu, travel ticket by ticket, etc.

There are several full pages of people's signatures (see left), and several pages of their calling cards, pages and pages of engagement cards and marriage invitations, various newspaper articles, obituaries (some not dated nor sourced). I did quick research on many names, and kept saying "wow, really? hmm. interesting."   All those engagement cards and marriage invitations should be identified in detail and put on the web for their descendants to find - don't you think?  A daunting task - there are quite a few.

Plus a page of political buttons (see on the bottom left).  Who are some of those people?  As a Canadian I have no idea of most of them - although of course I do recognize several.  But there are various political, memorial and other types of buttons or coins, needing to be identified and put into context.

And numerous pages - covered with small circles or shapes of what look like symbols of organizations... which organizations or societies are they??    (see on right)  He also glued down other similar shapes to fill in other pages - with no particular order or plan, as far as I can determine.  They need to be identified as well.

There's a Valentine love poem from my greatgrandfather to his soon-to-be wife (adorably bad!),  several post cards and notes from relatives and colleagues.  All of those souveniers should be transcribed, obviously.

There are Roselle Musical Society presentations (my grandmother and greatgrandmother sang, played piano), and other recital programmes.  There are dinner and luncheon menus in complete detail - amazing to me that he saved all these!!  Glorious menus, I must say!  And pages of travel tickets to/from various places in NY State and Bermuda and ...

Oh my.  There's a lot.  It all deserves a place all of its own, with all the detail I can muster from the record as well as in research - and with handling the pages as little as possible.  I do wish I could remove a few items and photos to look them over, or see if there's anything written on the back.  But this glue he used in the late 1800s - it's as permanent as it can be!  Amazing stuff - there's no way to peek behind anything.

A winter project, I think.  Right now, it's too warm to be handling old papers (29 C.).  I'm quite excited actually.  I've been wondering for several years what on earth I could do with this wonderful Album of my greatgrandfather, James Grover "Grove" TERWILLIGER.

TERWILLIGER is a surname on my mother's side, and a truly-made-in-America surname as well.  Terwilliger isn't the earliest surname in my family liines, but it is definitely the most interesting to me.  The following is a very brief summary.

The first immigrants in this line were a brother and sister, both apparently widowed, who came from Vianen [Utrecht] in the Netherlands, to New Amsterdam, in 1663, on "De Arent" - the Eagle.  Their names were
You can find these and more related details on Olive Tree Genealogy, http://bit.ly/MkhJsJ  under Ship Passenger Lists from Holland to New York 17th Century.  This is a fabulous site, which is always being updated and further researched, including the sources used to detail the passengers and ships to the USA.

The British took over New Amsterdam several times - there were three Anglo-Dutch Wars - but finally New Amsterdam was ceded to them in November 1674, and the British re-named it New York.  By the way, the current seal of New York now shows the date of 1625 as the founding of New York - this being the date of original Fort Amsterdam of the New Netherland Territory.

As the British were already using family surnames, they quickly required them for the inhabitants of New York, and the name Terwilliger came in common use in the family by 1690.  Spelling was totally variable, as anyone understands who has done genealogical research, so the surname was spelled in a variety of ways:  Der Villig, Van de Villig, Tervilig, De Willig, Der Willigen, Terwilligen, Terviliger, etc.  Eventually in this line, it settled into Terwilliger.  Evert Dircksen's son - Jan (or, Janse) Evertson - is apparently our particular line of Terwilligers.  They were wonderfully prolific - for example, Jan had 12 children (11 of them, boys), so there are many Terwilliger family lines in the USA.

There is a Terwilliger Family Association - http://bit.ly/MkhJsJ - and much history written about the early settlement of New Amsterdam.  Plus records from the Old Dutch Church of Kingston, Ulster, NY, where they appear to have settled before 1688, Schnectady Reformed Dutch Church, Zion Evangelical Lutheran Church, Athens NY, and others.  And I had the pleasure of information and details from Myron Terwilliger through emails early in my searches on the Terwilligers.  There are many many details still to research on my line of early settlers.  I've barely scratched the surface.

Many Terwilliger males have a nickname of "Twig" - and that's where my tree blog name came from!  I always wanted to name a boy Terwilliger, and call him "Twig"... there are traditions on my mother's side of families using surnames as first names (Grover comes to mind in the Buell line).  However, it didn't happen, and isn't likely to now.  Sigh.

Do you have favourite surnames or given names in your family lines -?