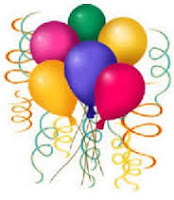 I never thought I'd get here - one entire year of blogging!  Yeah!!

This is the 37th post I've completed since the first one on May 25, 2012.  Many fewer than I'd originally thought I would do, but I'm happy to have posted that many - a new goal for the coming year of blogging will be to do MORE!  I'm still getting my blogging feet under me, as I ponder the purpose of my blogging - aside from "cousin-fishing".

Thank you to those of you who have been so encouraging to me about blogging:  Bill West, Susan Clark, Moises Garcia, Jill Ball, Albert Riezebos, Tessa Keogh, Leslie Lawson, Carol Stevens, Kathy Reed ... and so many more.  The comments I've received have been very encouraging, or amusing, or helpful, or thoughtful.  Even a "+" makes my day!  Maybe after a few more years I won't be wondering if anyone is reading these blogs.

Cheers to y'all, and I'll be continuing of course.

This year I'll continue working around my dead-ends in my ancestor lines, learning to search through more different databases, and digging through indexes or records page by page, line by line, as necessary. I have lots of time, after all - I just turned 70 a few weeks ago, and I'm determined to hit 100 as several women ancestors did!  One died at 102 (great health until the very end), one at 98 (ditto), one at 96 (a few years of challenges)... but still, I certainly have good genes! 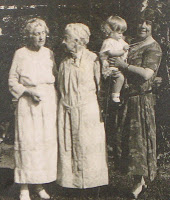 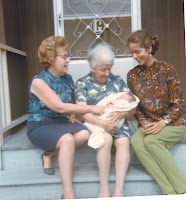 Hopefully one of my 4 children or grandchildren will be interested in all the genealogy details I've been able to find.  I need to find other 4-generation photos if possible - they're so touching...

He apparently was born in County Monaghan, Ireland, and died 1 April 1814 in Maryland, buried in Conewago, Adams County, PA, according to the information on the KUHN obelisk at Conewago Chapel Basilica Cemetery.  Two carvings give different dates for his birth calculating from death date:  the original stone states he was in his 42nd year when he died, i.e., born in 1772; but the obelisk gives his birth year as A.D. 1767, i.e., he was in his 47th year when he died.  This discrepancy has yet to be resolved... one wonders if the carver of the first small stone heard "42nd" instead of "47th" -?

Edward apparently immigrated to Pennsylvania before 1797, although records have not yet been found for him on a ship record, nor in a settlement.

However, he shows up married on 17th July 1797 in Morgantown, to Rebecca HUDSON, who was b. 18 March 1777 in the area known as Morgan's town (Morgantown, Berks, PA).  Rebecca's mother was Mary MORGAN, daughter of Col. Jacob MORGAN, who fought in the Revolutionary War; her father Jonathan/John HUDSON, was an early Welsh settler family in the region. I am able to continue research through the Welsh ancestors-- Morgan, Hudson, Bowen, and Piersol/Pearsall families in PA -- as land records and other historical details allow.

As you see for Edward McCABE, I have only two questionable birthdates, a marriage date, a death date, children and grandchildren's details.  But nothing really about Edward himself.  What was his occupation?  When did he actually arrive?  Did he come with relatives from Ireland? How was he regarded by his neighbours and family?  Hopefully I can continue to find a bit more information on Edward this year!

If you have any information on any of the names in this post, are a relative, do contact me and I will be happy to share what I details I have.

Charles Giles GRAVES, born 7 March 1824 in Jordan, Onondaga, NY.  This photograph has been tentatively identified as dated in the 1870s.  My great-Uncle Hal Terwilliger [his grandson] looks quite like him, which gives mild support for this identification.

My 2nd great-grandfather was a "Capitalist" according to the 1900 Census in Jordan, NY, and I find this occupation description rather amusing for some reason.  He owned retail businesses and buildings in New York, starting as a merchant.  The 1860 Census shows his real estate value as $3,000, and his personal value as $13,000.

I have a letter from my great-Uncle Hal Terwilliger to my mother, including this excerpt:
"Your Grandfather: Charles Giles Graves born Mar.7, 1824,  son of Cornelius Graves and Anna Treat,  descendent of Robert Treat, Colonial Governor of Connecticut and Founder of Newark New Jersey,  had four brothers:  William Thompson, Stephen Rensselaar,  Edward Seabury  and  Sheldon.

Sheldon went to what later became Chicago, built the first hotel there, the Lake House.   I had heard, though I know nor have any evidence, he built two factories on what was the Chicago River, for pails, chairs, etc. needed by settlers.   Your Mother remembers when she was a little girl her Uncle coming to Jordan with his wife and children in a buckboard, driving all the way from Chicago.   He came to be reequipped with clothes etc. and money and returned to Chicago, as per above."

The first Graves immigrant was John GRAVES, who emigrated in approximately 1635 (See Vol.3, Great Migration Study).  The TREAT line goes back through Robert TREAT, Governor of Connecticut from 1683-1696.  In England, the surname is known as TROTT, by the way, and the ancestor group appears to have originally lived in Taunton area of Somerset, migrating to the colonies between 1635-1640.  The first Treat immigrant, Richard TREAT, is seen settled in Watertown, and is recorded in Wethersfield in 1637.

My line goes through the middle girl, Gussie; her husband, James Grover "Grove" Terwilliger, is the ancestor who completed the TERWILLIGER SOUVENIR ALBUM (a separate blog of mine).

Charles G. Graves died at the family residence last Sunday.  Two weeks ago Mr. Graves suffered an attack of pneumonia from which he failed to rally.  He was born in Onondaga County and was 77 years old.  When a young man he went to Syracuse, and during the fifties and sixties was identified with the dry goods trade, being in partnership part of the time with Samuel A. Seager, under the firm name of Seager & Graves.  In this village of late years he had lived in retirement.  For many years the family Homestead was at the corner of West Onondaga and Southwest streets, in Syracuse.   The deceased was a genial, hospitable gentleman, who will be well remembered by the older generation.   Mr. Graves married Miss Harriet Ormsbee, who survives.  He is also survived by three daughters, Mrs. Gabriel W. Wisner of Jordan, Mrs. J. Grove Terwiliger of New Rochelle and Mrs Ernest Tyler  of New York.   The funeral was held at the family home on Thursday morning at 10 o'clock and services were held later in the day at Oak wood chapel.  Mr. Graves was the last of a prominent family who were identified with large enterprises here thirty years ago.
------- ------- -------

If any of these names are familiar or you wish more information, please do not hesitate to contact me or leave a comment below.
Posted by Celia Lewis at 4:39 PM No comments: