Ah, Charlotte BORTLE - you're my mystery 3rd great-grandmother on my mother's side.  You appear married with my 3rd great-grandfather, Grover BUELL (who was b. 1794, Northumberland, NY) on many censuses and then you're buried with him.  What do I know about you?  Very little.

You were apparently born 10 Oct 1797 or 1798 in (unknown) but usually listed as NY state on some documents.  I have no idea at all about your parents nor where they come from, as those early census records do not show such details.  You and Grove had 5 children: 4 girls, and only one boy.

Ann Janette was their third little girl, b. 15 Dec 1822 in Northumberland; she married Benjamin Baird in 1842 and had 2 sons, William Hulbert & Simon Melvin Baird.

Charlotte, on the 1850 census for Lysander, NY, you were shown as 53 years of age, with husband Grove BUEL (common spelling at the time), who was 55.  He's listed as Farmer, with land valued at $1,400, and states he was born in NY state. For you?  There's not even a mark to indicate "ditto" - nothing at all.  Wouldn't that have been useful?

You continued to be seen on Lysander censuses living with your husband, Grove. On the 1870 Census, Grove was listed as a Retired Farmer, with land valued at $23,000, and personal value $18,000.  Only a few years later however, we find your husband deceased 18 Feb 1874 in Lysander, and buried shortly after in the Lysander Union Cemetery, Lysander, Onondaga, New York.

Charlotte, you survived several more years after Grove, and died 22 Set 1879 in Lysander, being buried with Grover in the Lysander Union Cemetery.

The Bortle name in various spellings is not very common.  It is considered to be either a variant of a Dutch name - Bortell/van Bortell - or from the German, Bartel. There were apparently two groups of Bortle families around the early 1800: living in New York state, and another group living in and around Reheboth MA.  Perhaps your parents came from MA?  Unless one of your children's children and their descendants have a wonderful clue about you, and share it online, I'll likely never know.  But I'll keep looking... perhaps something will turn up.

I have found that there is another Charlotte Bortle roughly the same age who married a gentleman named Daniel - a different Charlotte, unfortunately.  But, perhaps they were cousins?

If you have any information on my particular Charlotte BORTLE do let me know by emailing me or leaving a comment.  calewis at telus dot com  will reach me.

My ex-husband's line goes back to the early New Haven CT settlers, including such surnames as PARDEE, TROWBRIDGE, HOTCHKISS, TREAT, and others. George PARDEE is my children's paternal 10th great-grandfather.

Note typed below the certificate states:

The carefully prepared sheepskin parchment church register of St. Andrew and St. Mary, Pitminster, from which the above record of baptism was taken, dates back to 1545.
This certificate was furnished by the present Vicar, the Rev. Alfred Hawken.

And as you can see on the right side of the image, this certificate can be found on page 20 of The Pardee Genealogy, Donald Lines Jacobus, 1927, New Haven Society, New Haven CT.
Posted by Celia Lewis at 9:38 AM No comments:

SURNAME SATURDAY - George GILLESPIE, b. abt 1850

George GILLESPIE, born about 1851 in Newton, Tyrone, Northern Ireland, is my paternal greatgrandfather.  He gave this year and birthplace on the 1911 UK Census in Barrow in Furness, Lancashire, England, which will help me, I hope, to find his birth registration or baptism, plus marriage registration.  Eventually.

The entire family - George, his wife and two small children, his 2 brothers, 1 sister, and his parents - all emigrated from Northern Ireland in approximately 1879, settling in Barrow where there was a significant increase in ship-building and related industry.

Here is a badly-damaged photo of George, taken in the 1930s; he died in February 1941 in Barrow, at the age of 90, apparently still going for a walk every day with his dog (Judy), according to Mary, his only daughter, with whom he lived:

As you can see, there is a gap of about 7 years between George and his next brother, Andrew, which makes me wonder if there might be another daughter or two, or another son, who decided to stay in Northern Ireland.  Of course they may have lost one or two children at young ages.  There is still much research to do in this family.

George & Catherine lived in Barrow for the rest of their lives.  George is listed on the various censuses in Barrow as an Iron Founders Labourer, and an Engine Fitter's Labourer.  The first Census I find the family in is the 1881 UK Census, where all 9 are living in the Walney Ward of Barrow in Furness, at "#262 Brick Cottages".  About 300 brick cottages were built for labourers for the burgeoning steel and ship-building industries.

The two eldest sons emigrated to Canada before the beginning of WWI, and the youngest son, his namesake, died in the Battle of the Somme in 1916.  By the time the war ended, his daughter was the only child still in England.  Mary (b. 1883) married later in life, in September 1930, widowed by 1948. The couple lived with her father until his death in Feb 1941.

Here is an excerpt from a letter Mary wrote to two first cousins of mine when they were young:

"Your greatgranddad is very well considering his 91 years.  He is always doing something.  Yesterday he was chopping wood.  Just now he is putting the potatoes on for the midday meal.  But the wireless is his pet hobby.  I don't think any scholar enjoys the broadcast for Schools, more than he does.  I tell him he ought by now, to be perfect in German & French.  But I really think the Church services are the broadcasts he likes best."

If you know any information on the above GILLESPIE names and families, do please contact me at calewis at telus dot com.

A very sweet Valentine's Day "Decree" from my Greatgrandfather, James Grover "Grove" TERWILLIGER, 14 Feb 1872 to his teen-aged sweetheart, my eventually-to-be Greatgrandmother, Clara Augusta "Gussie" GRAVES.  They were both about 15 yrs old at the time... although the handwriting seems more mature than that...  What do you think? 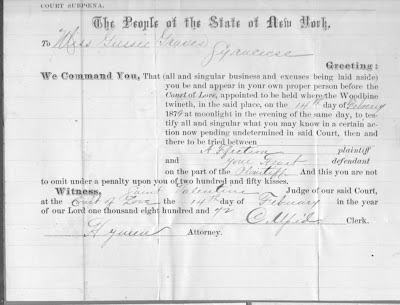 Found in the TERWILLIGER SOUVENIR ALBUM, about
half-way through this very
large album of many pages...
and will eventually be inventoried
on my other blog when I get to this page later this year.

It is a bit difficult to read; transcription follows:


The People of the State of New York.

We Command You, that (all and singular business and excuses laid aside) you be and appear in your own proper person before the Court of Love, appointed to be held where the Woodbine twineth, in the said place, on the 14th day of February 1872 at moonlight in the evening of the same day, to testify all and singular what you may know in a certain action now pending undetermined in said Court, then and there to be tried  between
...........  A Ffection ...............plaintiff
and ..........your  Heart...........defendant
on  the  part  of  the  Plaintiff.       And this you are not
to omit under a penalty upon you of two hundred and fifty kisses.

The couple married on the 2nd October 1879 from her parents' home.  Grove has glued in three different newspaper reports of their wedding - with (of course) NO identifying information about each newspaper.  I'll research that at another time.

Happy Valentine's Day to everyone.   Tell someone you love them, and promise them two hundred and fifty kisses. 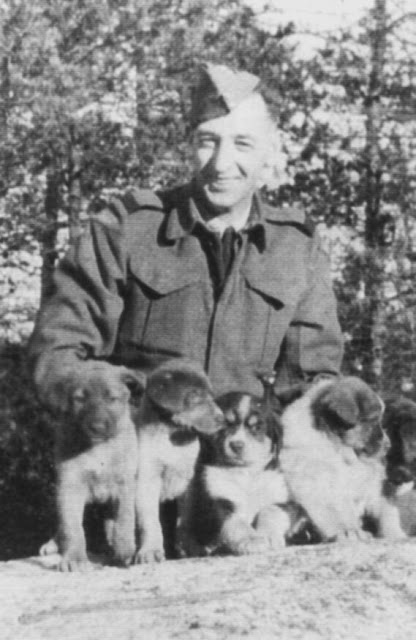 This is Dad when he was doing some training with dogs for service in the war. He said he loved this part of his training - although he spoke very very little about his military service. "Oh yeah, the heavy ack-ack training was interesting..."  he'd toss off and change the topic. Heavy ack-ack - Heavy anti-aircraft artillery guns. Here's a very interesting link about training in Canada on these guns, on the Memory Project.

After this time, he was trained in reading the new invention - RADAR - in Halifax, tracking the convoys coming into Halifax from the open seas. I must - MUST - get his military record. Apparently they did some testing of him (IQ test, perhaps?);  and as a result of the findings, he was put on the RADAR after specialized. training.

The joke between him and mom was that he went in with lots of curly hair and no glasses, and came out with bald spots (although I see a bit of receded hairline) and needing glasses all the time - from the effects of watching the RADAR.

This photo was part of a Christmas card which has my name as well as my older sister's name, and since I was born in 1943, I'm assuming that the photo might have been taken that year as well. Of course, it could have been taken at an earlier time as well.