Roger ATHERTON is the furthest back in time ancestor, the 4th great-grandfather of my PERRY son-in-law, 5th great-grandfather to his children. Born in Cheshire England, in approximately 1761, Roger lived to a good age of 85 years. As a genealogist, I am thrilled Cheshire's Parish Registers and Bishop's Transcripts can both be searched fairly easily as many are online, using FindMyPast.

The name Roger is sometimes spelled Rodger, and on several of his children's baptism documents, as well as in naming his second son, that alternate spelling is used.  Speaking of alternate spellings, the surname ATHERTON apparently originated north of Cheshire, in Atherstone, Lancashire, which might possibly be where Roger came from. I have not been able to prove his birth place, even though an 1841 Census states "Y" - meaning Yes he was born in the same county [Cheshire]. Frustrating, but just means I need to troll through more parish registers!

In 1803, 1808, and 1821, Roger, as Occupier, had a Land-Tax assessment for Crowton. A map will show that Crowton, Frodsham, and Weaverham are relatively close. In 1825, Roger is shown to be the occupier of several pieces of land.  His occupation on the 1841 Census is "Farmer." 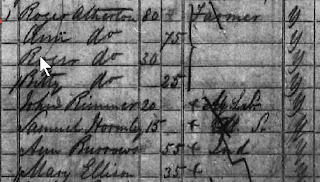 October 23rd 1841, Roger wrote out his simple will, making his mark, witnessed by Peter Rimmer and Samuel Hornby. He left everything to his wife Ann; and directed on her death that everything then to be valued and divided between his son Rodger, and daughter Elizabeth [still unmarried at this time, aged 34]. Executors were to be his nephew John Lewis of Arley Chester, and son Rodger; and Executrix Elizabeth Atherton [daughter].

The 1846 Index to the Death Duty Registers [image] shows Roger Atherton resident of Plumbley Chester, Executor J.Lewis of Arley.
Arley, by the way is about 7 miles north of Plumbley.

On July 10 1846, Roger ATHERTON's probate was settled including a statement that "the personal Estate and Effects of the Testator within the Diocese of Chester were under the value of three hundred pounds." And it is stated the Testator died on the 19th day of March 1846. He would have been 85 years old at the time of his death. We know from N.Cheshire Memorial Inscriptions that Roger was buried by St Oswald [Church of England] in the Parish of Lower Peover, as was his wife, Ann.

Just over two years later, his wife Ann died 13 Oct 1848 in Lower Peover. She may have been living with their older son, Richard Atherton, who had married Lettice and moved to Lower Peover, about 2 miles away from Plumbley.

Important DNA Note:  Atherton male descendants from Roger's two sons, Rodger jr. or Richard, will naturally show ATHERTON YDNA. However - male descendants from Martha ATHERTON's son, Thomas Hepard ATHERTON, will of course show up in Y-DNA matches - not as Atherton Y-DNA - but likely as Hepard/Heppard Y-DNA. Information from 1822 may not keep on being known in the 21st century, so I am making this note clear!

If these are your ancestors, I am happy to share what little I have on these ancestors. And if there are errors, please do let me know, via calewis at telus dot net, or in the Comments below and I will get back to you either by email or in the Comments. I appreciate the opportunity to correct any issues in these family trees.


Blogger - or my computer - is still not letting me "reply" to your comments, for some unknown reason. If I don't reply to your Comment, please know that I'm totally thrilled you came to read my post and commented!  You truly make my day.

Posted by Celia Lewis at 1:35 PM No comments: