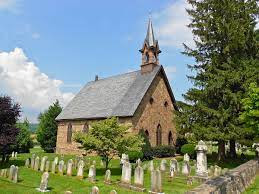 John HUDSON was the eldest son the six children of Nicholas HUDSON & Jean/Jane BOWEN, both of whom appear to have emigrated from Wales in the early 1730s. They came to Lancaster County, PA, with John's grandfather George & stepmother Margaret and their adult children.

John's birthdate is estimated 1735/36 in Churchtown, Lancaster, Pennsylvania. [Photo is of 1830s building] No register has been found to date to verify this information.

John and Mary had 7 known children said to have been born in Lancaster county - but note that Morgantown/Caernarvon in Berks county was on the county border with Lancaster County.

John apparently was in Capt. [later Col.] Jacob Morgan's company during the period from March 1777-1780. 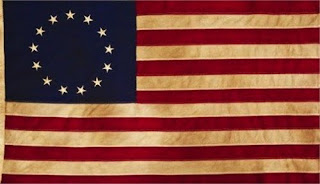 He died unexpectedly, intestate, before 13 May 1789, aged 54 years. His wife Mary was Administer of his account, and she signed a £500 bond to detail a full inventory on 13 May 1789, along with "Jacob Morgan Esquire and Aaron Rattice," who were signatories with her. The inventory [not including his property] signed off on 5 Jun 1789, came to £65 8s 11p. I can find no records of land ownership, but he did have a small farm. There should also be guardians registered for the children, the majority being underage, although I have not found these as yet.

I have not been able to find a cemetery where he might be buried, but it is likely in Caernarvon/Morgantown.

Mary died only 6 years later, aged 47, in 1795, in Caernarvon, Pennsylvania. Again, I have not found a cemetery burial as yet.  I note that she would have seen only her first child married. No further documents found to date regarding the likely guardians appointed for the younger children.

John - occasionally listed as Jonathan - does not seem to have left many clues to his life, his interests, nor to how he died so young.  More research is planned, but to date, these are the major points.

If these are your ancestors, I am happy to share what little I have on these ancestors. And if there are errors, please do let me know, via calewis at telus dot net, or in the Comments below and I will get back to you either by email or in the Comments. I appreciate the opportunity to correct any issues in these family trees.

Blogger - or my computer - is not letting me "reply" to your comments. If I don't reply to your Comment, please know that I'm totally thrilled you came to read my post and commented! You truly make my day!!
Posted by Celia Lewis at 5:44 PM No comments: