Continuing the #52Ancestors year-long challenge by genealogist Amy Johnson Crow, here is another very early immigrant to Connecticut, James BEEBE. James and his wife, Mary BOLTWOOD, are my 8th great-grandparents on my mother's line, 9th to my children, and 10th to my grandchildren. 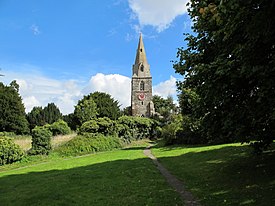 James was apparently born in Broughton, Northampton, in about 1641. Although I have been able to find the baptisms of all his siblings, I have not found James' baptism.
His parents were John BEEBE & Rebecca LADD, and James was the youngest of the 8 children.  In May of 1650, on the voyage from England to Connecticut, both his father and mother died. Two of his siblings were aged 20 and 22, and apparently took on the responsibility of raising their siblings. By March of 1651, the Beebe family appear to have joined with the Rev. Blinman, and settled in New London, CT. Several appear to have moved to Hadley, MA. after a time.
"A Monograph of the Descent of the Family of BEEBE, from the earliest known immigrant -- John, of Broughton, England, 1650" compiled by Clarence Beebe, of New York., John BEEBE's will, and other histories and registers, provided most of the information I have on James BEEBE.  On page 15 of the Monograph mentioned, it is stated that he was apprenticed to Thomas Stanley until he was 25 years old, i.e., in 1666. I was unable to find documents detailing the skills he was to be learning during that apprenticeship.
A year after his apprenticeship ended, on 24 Oct 1667, James married Mary BOLTWOOD, daughter of Robert BOLTWOOD and Mary GERNOR, in Hadley, Hampshire, MA.  Mary had been born in Massachusetts in 1646; she was the eldest of the five known Boltwood children.
James and Mary had the following children, all born in Hadley MA:
1.  Mary, b. 1668, .
2.  James jr., b. 1669, d. 1670, Hadley
3.  Rebecca, bap. 9 Dec 1670
4.  Samuel [ancestor], bap 26 Jun 1672, d. 1731 Litchfield CT; m. 1698 in Wethersfield CT to Hannah ORCUTT; 8 children
His wife, Mary, died on 19 Aug 1676 in Hadley, Hampshire, MA, leaving James with 4 children under 8 years old.  On 19 Dec 1679, James married for a second time, to Sarah Benydicke [Benedict] in Norwalk, Connecticut; no further children from this marriage.  I have no information on Sarah and her parents, whether she was a widow at the time, nor when she died. However two Benedict men were 2 of the earliest settlers of Danbury, and she is likely related to them.
I have just found a bit of history of the first settlers in Danbury, 8 men and their families, including James BEEBE. Click on this LINK to read more about this early history.
In Danbury, James held a number of positions: "Commissioner in 1691, a Lieutenant in 1696, a Justice of the Peace for many years from 1698, a Deputy to the General Assembly in 1710, and Captain of the Train Band, from 1716." [from the Monograph mentioned above]  All those details seem to indicate he was well thought of, and respected in the community.
James died 22 Apr 1728, 87 years of age, in Danbury, Fairfield county, CT, and is buried in Danbury, but the cemetery is not known. A gravestone was mentioned in a centennial sermon in Danbury, but it is not visible.
I am still researching this BEEBE immigrant from England, and hopefully I will find more information about his occupation and other social-political events that may have influenced the family.
=== / === / === / === / === / === / ===
If these are your ancestors, I am happy to share what little I have on these ancestors. And if there are errors, please do let me know, via calewis at telus dot net, or in the Comments below and I will get back to you either by email or in the Comments. I appreciate the opportunity to correct any issues in these family trees.

Blogger - or my computer - is still not letting me "reply" to your comments, for some unknown reason. If I don't reply to your Comment, please know that I'm totally thrilled you came to read my post and commented!  You truly make my day!!
Posted by Celia Lewis at 8:21 PM No comments: