"IN THE CENSUS," for #52ancestors challenge: 3 Generations of GILLESPIEs

Here we are on Week 5 of the year-long challenge of writing weekly 52ancestors/52weeks by genealogist Amy Johnson Crow.  This week the prompt is "In the Census."

Here is an 1881 England Census return which gave me 3 generations of my father's family: names, ages, birthplaces, residence address. The "do" on the right column is ditto for place of birth being Ireland for every member of this 3-generation family. This area of Walney [Walney Island] in Barrow in Furness, in north-east England, had many who were born in Ireland, now working in the shipbuilding industry or supportive industries.

However, I thought this was NOT my ancestor family when I first found it. In fact I scanned past it as the names didn't seem to match the tiny bit I thought I knew about my father's GILLESPIE family from England. This particular census of the neighbourhood ward of Walney [Island] in Barrow in Furness, Lancashire, showed the Gillespie family all born in Ireland. Well, that couldn't possibly be true - I "knew" that the Gillespies all came from England. I kept looking in England and found a few other possibilities but still, they were not particularly likely, I believed.

I took my list of  5 possibles and looked for them in the following Census, 1891. I eliminated 3 of the possibles because of the children's names - wrong group of names, wrong ages. That left me with only two possibilities.

Ohhh, and then the 1901 Census [above] in Barrow showed a Wm John married to Harriet with daughter Elsie. I knew my Aunt Elsie was the eldest of the Gillespie children. My family - very likely.

The confusion about my grandfather's name, William John. I'd always known his name as Jack, and I assumed that was a nickname for his correct first name being John. My mistake. He was going by his second name, which became a nickname, Jack. Don't know why I didn't twig to this shift in names when I first saw the 1881 Census. It was early in my genealogy searches, and clearly I was not as attuned to variants in names at that time.

In addition - this 1911 Census was written in my Grandpa's handwriting - isn't it beautiful? I've since found his signature on my Dad's birth registration as well, confirming this is indeed his handwriting.

Treasure - one finds treasure in the Census. There are so many possible clues to use for further research. The church district listed on the Censuses, place of birth for all in the household, ages, how long married, number of living children, occupations, residence at time of Census, signatures, and more.

If any of these are ancestors of yours, I would be happy to hear from you with your comments or corrected information. I am also very happy to share any details I might have that are not shown on this post. Contact information is found at the very bottom of this blog.

Blogger has a glitch which is stopping me from replying to your comments, but please do know that I appreciate your comments very much. You make my day! Thanks so much for stopping by to read my family blog. 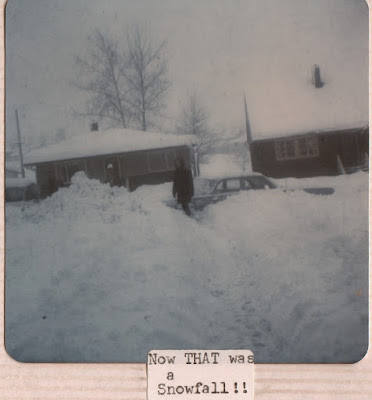 This week's topic was "Invite to Dinner" and it didn't lead to a good photo in my albums, so I decided to remind us all that Vancouver DOES occasionally have a big SNOWFALL! Many winters we have virtually no snow, others we have a week or three of snow, not deep, not lasting. And then, since the temperature runs +2/-2 from freezing, there are the rare icy wet snows which leave every intersection and alley crossing a skating rink...

Here is the west-facing view from the porch of our home on Matapan Crescent in Vancouver, probably in early-mid January. There's a roughly shovelled pathway, and we've shovelled the sidewalk out front of the house as well.

Of course as kids, we made snowmen, flung ourselves down to make snow angels, threw snowballs, and also tunnelled through the big mounds of snow! And I bet we pulled anything we could slide on [cardboard boxes, e.g.) to the hill on the other side of those two houses - they backed onto the hill and park.

The little label on this photo shows it was from my personal Photo Album. One year my Mom made 3 different photo albums, a unique one for each of us. There were some family photos which were copied and put in each album, but most photographs were unique about us. A very wonderful Christmas gift.

There's no date on this photo, nor identifying info on the people standing on the sidewalk. Probably Dad, and I'm not sure who the woman would be. Mom would have been the one taking the photo, I think. Probably someone in the family will know.


I appreciate you taking time to read my blog, and you make my day if you leave a comment! You can also contact me on the address at the bottom of the column page.

Posted by Celia Lewis at 9:42 AM No comments: 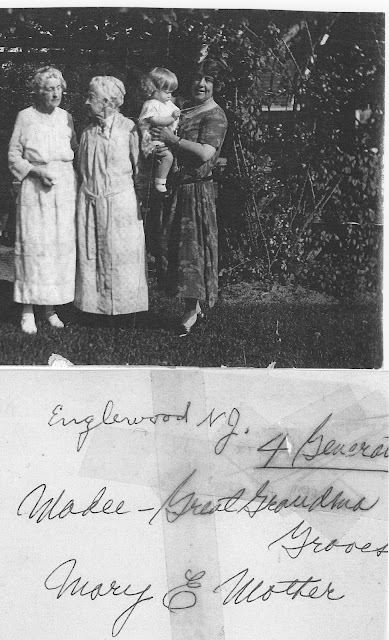 This year I am participating in Amy Johnson Crow's genealogy challenge, "52 Weeks/52 Ancestors," which I also followed for two years 2014 & 2015.

We have relatively long-lived ancestors showing in our lines: my father's parents lived to mid-late 80s, my mother's mother/grandmother/great-grandmother lived in their 90s and 100s. I have every expectation of living to 100!

My longest-lived direct ancestor who lived over 100 is my 2nd great-grandmother, Harriet "Hattie" Philena ORMSBEE.  Here's a 1924 photo of her at 97 years of age, during a visit my grandmother took with her 5 children including my 2 year old mother, from Vancouver BC Canada to Englewood, New Jersey. She is the shortest in the photo, second from left.

My grandmother wrote on the back, identifying each person and their relation to her. I love how this photo shows relationships here. My 2 year old mother is playing with her mother's jewellery, and Madee and GreatGrandma Graves were clearly talking about something while waiting for the photo to be taken. I suspect Madee's husband, my great-grandfather, was taking the photograph.

"Mary" [my mother] 2 years old in this photo

I have a number of long-lived persons in their 90s as well, even back in the 1700s with baptism dates with birthdates as well. Of course, there are also a number of women who died young, likely in childbirth, as well as men who died before 50, perhaps in accidents or due to illnesses.

If any of these are ancestors of yours, I would be happy to hear from you with your comments or corrected information. I am also very happy to share any details I might have that are not shown on this post. Contact information calewis at telus dot net is found at the very bottom of this blog.

Blooger has a glitch which is stopping me from replying to your comments, but please do know that I appreciate your comments very much. You make my day! Thanks so much for stopping by to read my family blog.

For Amy Johnson Crow's year-long challenge: "52 Weeks, 52 Ancestors," here is the 2nd week with prompt, "Favourite Photo." I have too many favourite photos to find it easy to choose one. 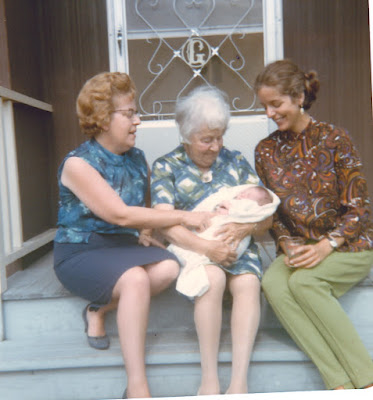 There's the 1917 photo of my Gillespie Grandparents and their five children including my 10 year old Dad.

There's also the 1899 tintype photo of my Gillespie Grandparents - their engagement photo.

Or, the 1924 photo of 4 generations in the Terwilliger line with my 2 year old Mom.

Plus the photo of my baby brother with Mom, my big sister and me, on the stoop. And... Too many.

I decided to use the photo of 4 generations with my first baby, me, my Mom, and her mother, sitting on the porch of our house. Summer 1968, and my grandmother is 88 in this photo. She died in late 1973.

Posted by Celia Lewis at 7:20 AM No comments: 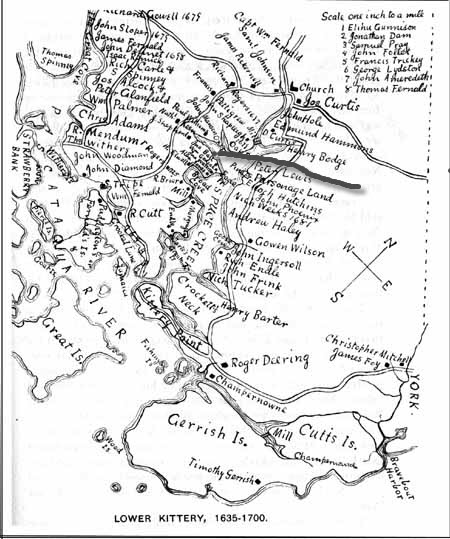 John BALL, is my 7th great-grandfather on my mother's lines. Born approximately 1635, likely in Kittery, York, Maine, he is the end-point of this line. Kittery is on Pascataqua River, the border between Maine and New Hampshire. Historically, Kittery began to be settled by the English settlers as early as 1623, and was incorporated as a town in 1647.

I have very few records of John BALL. He had land grants in Kittery, as early as 1649, where he and three other men are listed as having a grant at Cape Nattucke, Kittery. Note the line pointing to his name, Jno Ball, in roughly the top third of the map of Lower Kittery on this page. He's mentioned as a witness on several land sales for Wm. Pepperell, and in regards to his will in 1717, registered/recorded in York County, Maine. His marriage date is estimated from records of his children's marriages, showing their adult status. Not very much information at all for such an early settler in the region.

It is known that he had an uncle, his father's brother Richard Ball, as John (1635-1717) was executor of his [Richard's] estate. His father may have been the John BALL, a fisherman, who was a juryman in court held at Gorgeana, Maine, March 15, 1649.

As mentioned above, it is known he purchased land, e.g., at Eagle Point in April 1667, as well as land on Spruce Creek, from Thomas Withers. The map of Lower Kittery at the top of this blog, loosely dated 1635-1700, shows his Spruce Creek land. It is unclear what occupation he had, perhaps a fisherman. He left only a minor mark in the history books, as many do. He worked, married, had children, wrote a will, and died.

He wrote his will on 6 June 1717, which is fully transcribed on p. 398, Vol.8 of  York Deeds, part of the collection Maine: Early Wills and Deeds 1640-1760.  This can be seen on AmericanAncestors website. In his will, signed/marked by both himself and his wife, he provides to give all property, house, goods and chattels, to his daughter Elizabeth and her husband Francis Pettygrew [sic]. This was to be in payment for their assistance in providing nursing and personal care needs. No mention is  made of their other children or grandchildren. Possibly John had already provided for them. One child would have already died before this date, daughter Joanna.


If any of these are ancestors of yours, I would be happy to hear from you with your comments or corrected information. I am also very happy to share any details I might have that are not shown on this post. Contact information is found at the very bottom of this blog.

Blooger has a glitch which is stopping me from replying to your comments, but please do know that I appreciate your comments very much. You make my day! Thanks so much for stopping by to read my family blog.