I am participating in the year-long #52Ancestors weekly challenge from genealogist Amy J. Crow, and here is this week's offering: my mother's grandfather, Dr. Louis DeBarth KUHN.

Louis Kuhn's middle name, DeBarth, was chosen from a highly respected Roman Catholic priest in the early days of the Conewago Chapel, PA. A quote from Preachers, Reverends and Ministers of Lancaster co. Pennsylvania (1821-1830) says, "Father DeBarth was no Jesuit, but lived among them for many years."

Louis' parents were Joseph Jacobus KUHN & Jane Rebecca McCABE, who married Nov 5, 1826 in Conewago, PA. Louis, born October 22, 1829 and baptised November 8th in East Berlin, Adams, PA, was the 2nd of their 9 children, the 2nd of 6 boys. Note that on some censuses his first name is spelled Lewis, clearly the way it was pronounced. Here is his [Latinized] baptism record, Conewago PA:

For his medical degree, first Louis received his Pharmacy degree in 1851, as listed in the book, First Century of the Philadelphia, pg 465:

He then received his Medical degree 1854, and is found listed in the Matriculants of the University of Pennsylvania, Medical Class, Session 1851-52, p.20.

He entered the Marine Service of the United States and in 1854 sailed around Cape Horn to California, ending in Port Townsend, Washington. Interestingly he worked with the expedition which located the boundary line with British Columbia. He became well acquainted with a number of the army officers on board, including Ulysses S. Grant. In 1856, he wrote a letter [unknown receiver] published in the Monday June 6, 1856 edition of The Republican Compiler, which extracted a number of paragraphs, totalling over a column and a third. He detailed the scenery, his interactions with the native Indians, and the small towns in the area. Remember that Port Townsend was officially settled only in 1851 - these are early days!

His future wife, Amelia PETTYGROVE, is a few blocks away, aged 16, living with her family and attending school.

Dr. Louis KUHN & Amelia "Millie" PETTYGROVE were married January 17, 1864, in Port Townsend, Jefferson, Washington Territory.  Amelia was born in 1844 in the Oregon Territory, one of the very first settlers' babies. The Oregon Territory was split into two territories, with the southern part becoming the state of Oregon in 1859.

Louis & Amelia had the following ten children, the first two born in Port Townsend, the youngest born in Brooklyn NY, the remaining were born in Reading, Berks, PA, near where his parents and several siblings lived.
1. Dr. Joseph Francis, b.1864 WA, died at father's home 12 Sep 1898,
Brooklyn NY
2. Louis B., b.1866 WA; apparently died before 1880, Reading PA.

He established a medical practice in Brooklyn after they moved to New York. He was a staff member of St Mary's Hospital, Brooklyn, a Roman Catholic hospital. This hospital was owned by St. Vincents Catholic Medical Centers of New York; it closed recently in 2005.

Louis' wife, Amelia, died January 18, 1888. In the early 1900s, he began selling off some of his properties in the Port Townsend WA area, asking his younger brother, Joseph A. Kuhn, a lawyer there to assist him. 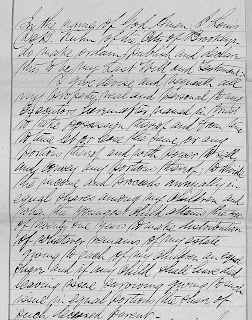 He wrote out his will the year after Amelia died, on October 8, 1889, in Brooklyn, NY. In the 1900 Census, he was living at 471 Willoughby Ave in Brooklyn, [owned home], widowed,with his daughter, Jennie, aged 31, single, George, aged 19, single, and Marguerite, aged 14, at school.  Note, in 1910 Census, Jenny is listed as the 'Head' of the family, with George, Marguerite, and Charles, together, still living at 471 Willoughby Ave in Brooklyn. See building from Google Maps, above right.

Louis DeBarth KUHN died May 7th, 1908, at his home, 471 Willoughby Ave, Brooklyn NY. He was buried in Holy Cross Cemetery in Brooklyn NY. His will from 1889 is very simple, leaving any property to be leased/sold and the value to be shared equally between his living family. The first half of his will is above on the right. And on the next page, his signature, made with a different pen, below:

All his heirs, his adult children, living at the time, were Jennie, Charles, Nellie, George, and Marguerite. His Will was admitted to Probate August 19, 1908. The original will/probate documents have been copied; photocopies are in my files.

I plan to transcribe the newspaper article which is taken from a letter he wrote, and also to transcribe his will, and put those in a separate tab of this blog [see tabs above]. Look for those in a few weeks.

If these are your ancestors, I am happy to share what little I have on these ancestors. And if there are errors, please do let me know, via calewis at telus dot net, or in the Comments below. I appreciate the opportunity to correct any issues in these family trees.


Blogger - or my computer - is still not letting me "reply" to your comments, for some unknown reason. If I don't reply to your Comment, please know that I'm totally thrilled you came to read my post and commented!  You truly make my day.

Posted by Celia Lewis at 7:45 AM No comments: 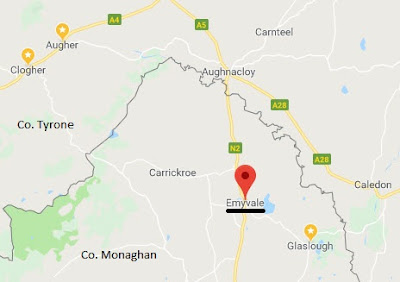 I've missed a few weeks in the weekly challenge from genealogist Amy J. Crow, but here is this week's offering: Martha McGuiness [var. Maginnis/Magenis], from Emyvale, County Monaghan, Ire. Emyvale was originally known as Scarnageeragh [Scairbh na gCaorach]. It is clearly in the north of County Monaghan, as can be seen in the map image. In the 1911 Census of Ireland, there were only 81 households listed.

I know very little about Martha, my son-in-law's 2nd great-grandmother on his father's side. This post will summarize the little I know, and perhaps eventually, someone will recognize her and contact me with more information!

My first information about Martha McGUINESS and her husband Patrick DONAGHY was seeing them listed as parents on their 5th child's marriage record in Glasgow, Scotland, Martha Jane DONAGHY, the great-grandmother of my son-in-law. Scotland? A thin thread, until I read all the details about parents, confirming names:

This week, I found her listed as the mother of Martha Jane DONAGHY, on the baptism image on FindMyPast.ie database, Ireland Roman Catholic Parish Baptisms - image below. It's a dark challenging image, names are in Latin, her surname is not quite the same spelling, but I'm certain this is the correct family:

Martha McGUINESS was born approximately 1845-1849 in Emyvale, Co. Monaghan, Ire. I have no information on her parents or siblings. She married Patrick DONAGHY [var. Donaghey, Donaghee/oe], in 1864 in Co. Monaghan, Ireland.  I am unable to find the actual date or an image of their marriage record. 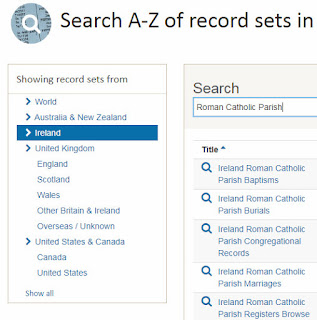 The youngest two birth dates are calculated from censuses.  Also, it seems as if there is a likely baby in 1881 who died, which is my assumption for the gap in births, adding the total children born to 10.

At some point before 1897, their daughter Martha Jane moved to Glasgow, likely for employment purposes. It is not clear if she came with her parents or any siblings, as I have yet to find the family in the Scottish censuses of 1891, 1901, 1911.

Instead, I find Patrick and Martha living in Emyvale, Monaghan with one of their youngest children:  on the 1901 Census [Susan], and 1911 Census [Thomas].

The next record I find for Martha is a death event of June 1915 in County Monaghan, Ireland. She would have been approximately 67 years of age. This death date is not proven as I have yet to find a image/document, only an index with very limited details.

I have had limited success in finding documents linking Martha to her husband and children, and extremely limited success re Martha's birth and death. Ages on Census records have been clues to follow.  A big question is why Martha Jane, her namesake daughter, was living and married in Glasgow Scotland in the late 1890s.

If these are your ancestors, I am happy to share what little I have on these ancestors. And if there are errors, please do let me know, via calewis at telus dot net, or in the Comments below. I appreciate the opportunity to correct any issues in these family trees.