Anderson WALTERS was born 10 May 1794 in Pittsylvania county, Virginia, the eldest child of parents, Archibald "Archer" WALTERS and Edyth "Edy" SLAYTON. According to death records, his father Archer lived to 100 years of age.

In 1815 in Sumner county, Tennessee, Anderson married Elizabeth JOYNER, the eldest child of Whitehead JOYNER and Lucy TAYLOR. The families lived close by, and I was able to find that Elizabeth's younger sister Lucy Walters married Thomas Joyner in about 1830. The young Walters family moved to Tennessee soon after they married.

All their children were apparently born in Sumner county, Tennessee, although I have seen a few Ancestry trees stating Montgomery county as their birthplace. I have not yet researched all the children's details. The family moved to White county in the south east corner of Illinois in the mid 1830s. Note that Illinois achieved statehood in 1818.

By 1840, the Walters family were living in White county, IL, on 200 acres in Township 6 S Range 8E.  The 1850 Census taken October 18th, 1850, shows that Elizabeth JOYNER's brother Thomas and his family were farming next to them. Most of the Walter's children had married by this time, and living at home were only Albert and Margaret. Two young Yates boys also were listed as living with them on this census. On the previous Illinois census, there were seen several Yates families nearby them, and I wonder if there is a possible family connection with the surname Yates.

Illinois took a State Census in 1855, and Anderson is listed in the section labelled Township 6 S Range 8E.

On 26 Oct 1852, Elizabeth died, aged 57 years of age.  Two years later, Anderson married Mrs. Christena Shaw on 16 Sep 1854, in Hamilton County IL. This county is directly west of White county. There were no children of this second marriage. In the 1860 Census for Township 6 S Range 8E, only Anderson and Christena are listed together. He states his real estate holdings as worth $1600, with personal value of $725.

Anderson WALTERS died aged 68 years, on 30 Apr 1863, and was buried on private property in White County Illinois. Apparently the stones of Anderson and wife [Elizabeth?] can be seen from the road, County road #025E, just north of County road #500N. 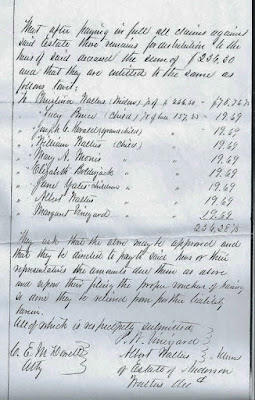 His probate list showed a distribution, after payment of all claims, to widow and heirs, with funds distributed to them.  Likely land and other items would already have been passed on and distributed.

Because of the way the listing is shown, with equal specific amounts to each child, with one-third to his second wife, I am assuming that there was no will at the time of his death. I will certainly go looking again, to be more certain.

If these are your ancestors, I am happy to share what little I have on these ancestors. And if there are errors, please do let me know, via calewis at telus dot net, or in the Comments below. I appreciate the opportunity to correct any issues in my family trees.