This year's challenge by Amy Crow is another weekly blog, but based on Themes. Last week, it was So Far Away.  This week's theme is - in keeping with Valentine's Day - LOVE.  Amy suggests an ancestor I feel close to, or love to research, or who seems to have lots of lovin'. Hmmm.  This is a challenge. I'm chosing FW PETTYGROVE's wife, Sophia ROLAND/RULAND.

We know very little about my 2nd great-grandmother, Sophia.  Her surname has been spelled as either ROLAND or RULAND.  We do not know where in "New York" she was born, nor do we know anything about her family, parents, siblings.  Another messy brick wall which I will have to do more research on "soon".  Written in my To-Do list, with where, what, why details.  Other details in my Research Log.  (Thank you Thomas MacEntee at Geneabloggers for the great research tools!).

The Oregon Historical Society (Portland, OR) has a card on her as follows.  Unfortunately I have yet to find out the basis of their information noted here:

She married in early 1842 in at the age of 18 years to a 28 year old entrepreneur, Francis William PETTYGROVE. After marrying, likely in Calais Maine, the couple stopped in New York to bring aboard various supplies which FW intended to sell to the new settlers making their way across North America to the Pacific Northwest.  He was an agent with A.G. & A.W. Benson of New York, purchasing over $15,000 of merchandise to bring with him.

The newly-weds immediately embarked on 10 Mar 1842 sailing around Cape Horn to the Sandwich Islands (Hawai'i), where Sophia delivered her first child, Alfred, on 3 Jan 1843.  FW brought not only his new wife and items to sell, he also brought his one-year-older sister, Mary Charlotte Pettygrove, married to Phillip Foster, with their four children. Happily this meant that Sophia had an experienced sister-in-law to help her in her first child's birth. From Hawai'i, the two couples and their families moved to a different barque and in 19 May 1843 arrived in Oregon City, then moving to Portland, Oregon Territories.   After 3 more children were born, they moved up the coast, where FW founded Port Townsend; and 3 more children were born in Port Townsend.

In other words, Sophia spent the first year of their married life - this 18 year old girl and her 10 years older husband - on a sailing boat, pregnant, then with a small baby, born in a strange island out in the Pacific Ocean, ending up in a wilderness forest by the sea.  Whew! Courage indeed. And I'll suppose definitely, LOVE as well.

While in Portland region, FW tossed a coin with his partner A.L. Lovejoy for the rights of naming the new city known as "Portland".  FW Pettygrove won the toss.

Sophia & FW had the following 7 children, all but the first born in Portland: 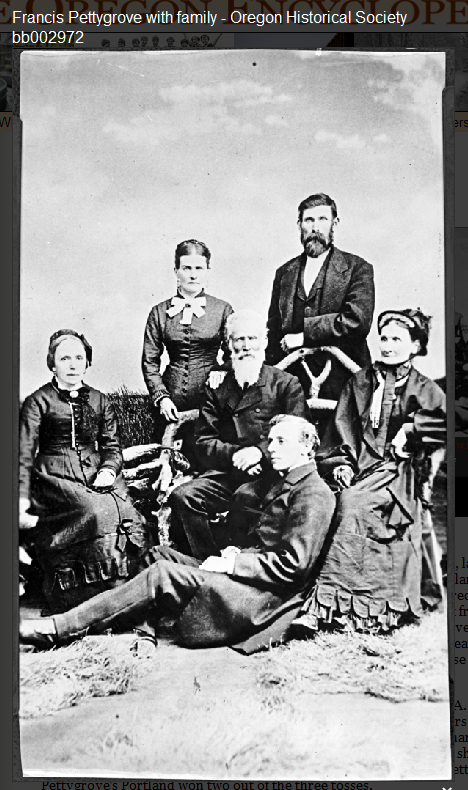 The photo of the Pettygrove family (Oregon Historical Society) has been copied into a number of books and articles about the Pettygroves, and shows FW PETTYGROVE seated with wife Sophia on the right, FW's sister, Mary Charlotte Foster seated on the left, Benjamin S. standing, daughter Sophia behind, Frank Jr on the ground.

Note that the standing daughter could be either Sophia or Lucy.

If you have information about the Pettygrove family, or about Sophia Ruland/Roland, I would be thrilled to receive any details via calewis at telus dot net, or in the Comments below.  Thank you so much for stopping by and commenting.

Hi Cecila,
I was quite interested in this post because I also have a distant relative who was in the Sandwich Island around the same time as your Sophia. My Harriet Fairchild and Anthony Ten Eyck married 1836 in Albany, and they had two children b. 1839 and 1844 (don't know where they were born).
Unfortunately, I don't know the exact date they sailed, but I do know she died 5 Nov. 1846 of tuberculosis. Her husband was the U. S. Commissioner in the Sandwich Island bet. 1841-1843. He must have held another job, because they were still there in 1846.
My question to you is, where did you find your information, is there a ship manifest anywhere? Wouldn't it be wonderful if they were on the same ship together? Many thanks.

Look at Find A Grave Memorial# 147834667 I just listed Sophia and her Obituary from the Port Townsend NEWS paper.

Celia Lewis
Vancouver, BC, Canada
Now retired, I am enjoying exploring my passions: GENEALOGY, Writer, Geology, Marine Biology, Photography, Vegetable gardening, more time with my kids and grandkids. Writer of articles and handouts for Genealogy for Beginners classes, which I teach several times a year. Born and raised here in the rainforest of Vancouver BC Canada. Genealogy blogs (2): "Twigs and Trees", "Terwilliger Souvenir Album".