This year's challenge by Amy Crow is another weekly blog based on Themes. Last week's theme was Defective, Dependent, Delinquint and I wrote about my 3rd great-grandfather Jacob ORMSBEE's unusual second wife.  This week's theme is NON-POPULATION SCHEDULES/censuses.  Rather than follow the theme, I'm choosing to write about another 3rd great-grandparent:  Mary McCURDY. 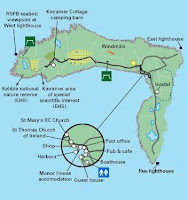 Mary McCURDY is the only daughter I have found to date, for parents, Neil and Abigail McCURDY. Her father was born 4 Jul 1745, Rathlin Island, Antrim, just off the northern coast of Northern Ireland, and apparently settled before 1775 in the St. Andrews region, New Brunswick, Canada. This is on the border with Maine, on Passamaquoddy Bay - a very fluid friendly border area for many years. Nothing is known about the history of his wife Abigail, to this date. Apparently a group of Rathlin Island families and individuals came over to Lubec ME, not far away (dates unknown), as found on one of several histories of McCurdy family lines.

It is speculated that there were also two sons born to Neil & Abigail McCURDY in New Brunswick:  George, (abt 1782-1835), and Alex (?1785-?).  Their names show up after Neil's death, in notices in the New Brunswick newspapers, but no other details have been confirmed. Daniel Johnson's newspaper transcriptions have been very helpful for NB ancestors.  Mysteries abound with this early family.

Mary McCURDY was born in March 1778. Her birthplace has been stated to be Halifax county, Nova Scotia in several histories; however that appears most unlikely as her parents lived in St. Andrews, New Brunswick, for all their life, as far as can be determined.

At the Christ Church & Trinity Anglican Church, on 4 Dec 1801, Mary married Thomas PETTYGROVE, in St. Stephen, which is literally across the St. Croix River from Calais, Maine. Thomas PETTYGROVE was born Oct 1765 in Kittery, York, Maine, but the family moved to Calais before 1792.  At that time, Thomas and his elder brother Francis each bought a hundred acres of land in the region of Calais, settling there, and raising their families.  Note that Calais ME was incorporated as a town in 1809.  Her husband's surname is often spelled Pettegrow or Pettegrew.

Mary and Thomas had the following children, b. in Calais, ME unless indicated otherwise: 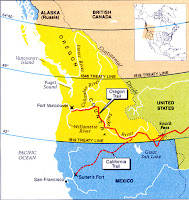 She certainly saw sadness with losing children, either through death or migration.  #6 Mary Charlotte and #7 Francis William both disappeared to the west coast of America, over 3400 miles distant; they and their families were part of the opening of the Oregon territories (which became WA and OR).   #2 Neal her 2nd son, and #5 Sarah Ann, her 3rd daughter,  both moved with their families to Wisconsin, over 1300 miles distant.  #9 Abigail died after 5 children.


Thirty-three grandchildren she never met, and four children never seen again, plus one daughter who died as a young woman.  Challenges and losses. I always wonder if there are packets of letters to and from her children, sitting in an attic somewhere, which would provide more details of her life, and/or the lives of her children.

I have not researched all details possible for the various other children.  I have researched #6 and #7 because of my connection with #7, and his sea migration together with his sister #6 and her husband and family to the west coast, in 1843.

Obviously if you have any information or corrections about Mary McCURDY and her family, I would be very pleased to receive this.  You may send details through my email at bottom of page, or in the Comments section below.  Please note that FindAGrave notes on memorials for her and her husband have inaccuracies.  I have added a few comments to their pages to help with corrections.