This year's challenge by Amy Crow is the final weekly blog based on Themes - some of which I did not use. This is the second year that Amy Johnson Crow has hosted the challenge, and I have been able to do all 104 weeks' posts. Along the way I have reviewed those ancestors I wrote about, done further research, added significantly to my To-Do lists, written many notes and followed many clues and crumb trails. I've also had the pleasure of being contacted by people who are related, as well as by helpful individuals in the genealogy community.  A few cousins and my adult children have sometimes been quite intrigued by the posts...

This week I am writing about a wonderful breakthrough I had in researching in my children's LEWIS line, for Arthur Gifford CAMPION. A wonderful name, isn't that? I 'knew' the Gifford was likely a maiden surname, but whose, and where? From research on his daughter's marriage to Charles LEWIS, and her death in Bath, Ontario, Canada, I knew she was born in County Cork, and that the family appeared in Ontario between 1840-1844.  But I had little luck finding more details in Ireland. 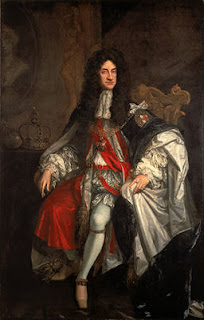 I received a friendly email from an Irishman named Chris, who came across my earlier blog about Arthur, and wrote me.  He mentioned knowing there were many Campions in Co. Cork, and I should look there... (I'd been looking but with very little results).  A few emails back and forth, and he pointed me to the Grove White Notebooks on the website: Cork Past and Present.  A few more emails back and forth, and I finally typed in "Grove White" and found the notebooks:  click on Places, then on North Cork, to see Grove White in the left side panel. He also told me the Campions he knew of were in North Cork [county], in the Leitrim Castle area.  A-ha!! By flipping pages through the several notebooks, I found Leitrim Castle, and details of the land ownership, and more.

I quickly realized that King Charles II [photo to the right] who returned to the throne after Oliver Cromwell died - had rewarded the many officers of the 1649 Army [who had been involved in crushing Ireland under Cromwell], by giving them Land Patents, from 1657 onwards.

From Page 13 onwards, you can read about the previous owners of the land, the total acreage and value of the rents of the land, and more, in the pages.  I found it interesting to see sources mentioned relating to this Campion family living from medieval times in Essex, relating to Nicholas de Campion, a Norman Crusader. 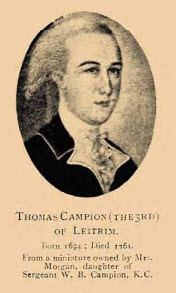 p.18:  "CAPTAIN THOMAS CAMPION, of Leitrim, of the 1649 Royal Army of Ireland, b. 1619.  He received a patent grant of Leitrim estate, Co. Cork, from Charles II, 26 Nov 1667."
There followed more details of Capt. Thomas CAMPION, his lands, a few photos of the Campion Family Vaults, Leitrim Church, and more.  Thomas CAMPION became one of the first members of the Society of Friends in the area, along with others of the Army; he was buried in 1699 in the Quakers' Burial Grounds in County Cork.


The miniature on the right is of Thomas Campion the 3rd.  This third generation named Thomas Campion married Mary, second daughter of  John GIFFORD (son to Col. John GIFFORD, a fellow grantee of 1666) - which is where I began to get very excited. There's that name Gifford.

And on page 18, after reading about a few more generations of Campions, I came across the following: 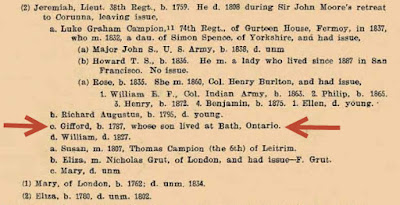 I squealed and jumped out of my chair when I read this - frightening my cat and my son as well! I was so excited!!  It was after 11pm, so too late to call anyone to share my excitement...

Now of course, I need to do much more research, filling in with the specific documents footnoted in this notebook of Col. James Grove White. Oh, to be in Ireland, going through the records held either up in Dublin or in Co. Cork, looking for burials, wills, probates, births, and other histories of related families.  In the meantime, over the coming year, I will be learning even more about searching in Ireland for more CAMPION and related individuals' documents/histories and more. The Grove White notebook implies details back to the 1300s or earlier... However, I'd be happy to find out Arthur's mother's name, and perhaps a little about Arthur's siblings!

Several of the Campion men went to Australia, other Campions went to the United States, a few over to England. Many appeared to be well educated, and were lawyers, physicians, or ministers. The land provided a large revenue to the Thomas Campion family, and relatives.  A number of marriages were seen to be with 1st, 2nd, 3rd, or 4th cousins. There is a large Campion Family Vault with details of the deaths of numerous family members.

A huge THANK YOU to the friendly reader "Paddychris" who helped me break through this challenge. Who knows when I'd have eventually learned about the Grove White Notebooks?  The Cork website was a bit difficult to search at first, as every website has its own method of organizing records and databases.

If you know anything more about any of the above individuals, I would be so pleased for more details. And if you wish more information on them, I'm also happy to share. Contact me at my address at the bottom of the page or, in the Comments section.

Sometimes my Blogger account seems not to allow me to "reply" to your comments. Do know that I value your comments immensely.  You make my day! Thanks for stopping by to read my personal genealogy posts.

Celia, your story gave me goosebumps! What an amazing thing to find in those records (reference to the Bath, Ontario family member) and you could not possibly have simply gone to sleep after making that discovery. One of the nice things about blogging is the possibility of making these connections that can open doors one doesn't even know existed.

Thanks so much for your comments, Anna & Joanne. I appreciate the fact you took the time to read and comment on this post. It was indeed incredibly exciting to find the 'smoking gun' clue that linked Bath Ontario to County Cork, in such a definitive manner.
I'm sorry that Blogger is not letting me reply... hopefully I'll have that issue resolved in the New Year.

Hi. I have just stumbled across this website and the names of Gifford, Campion and Bath, Ontario just rang bells for me. Looking across all my Campion families I find that I am a distant cousin of Celia Lewis! My 2 x great grandmother was Charlotte Campion and so I am a direct ancestor to the Thomas' of Leitrim! There is a Lewis connection there somewhere with one of the Thomas' siblings and some went to Canada, India and I've ended up in Australia (Perth West Australia). Charlotte Campion b 1847 is from Jeremiah Campion (elder brother Thomas 7th of Leitrim) who was born in Leitrim but was disinherited from any benefit as he fell in love with his cousin Sarah Bunworth and got out of Ireland and went to India so this is where our branch comes from.
Would be great if there are any others out there who are related to this family!

Hi Carol, sorry that Blogger is still not letting me answer directly. At some point I'll have to move my blog over to another platform.
Regardless, it's lovely to find you as a cousin! Cheers!!
I don't have your Jeremiah & Thomas individuals in my family tree, as I was trying to keep to fairly direct lines in my research. My collateral lines stop with Thomas Campion 6th 1786-1833, and his wife, cousin Susanna Campion (1789-1858) in Leitrim, Cork, Ireland. There were several cousin marriages, not unusual in these years.You can contact me directly at celia dot winky at gmail dot com. I don't have a MyHeritage subscription any longer, so I can't contact you there, either! Thanks for commenting - hopefully more CAMPION relations will turn up!

Carol my gt gt grandmother was Charlotte Campion.
I have a photograph of her in India with her daughter, grandchildren, and two of her GT grandchildren, one of whom is my dad. If you would like a copy just let me know.