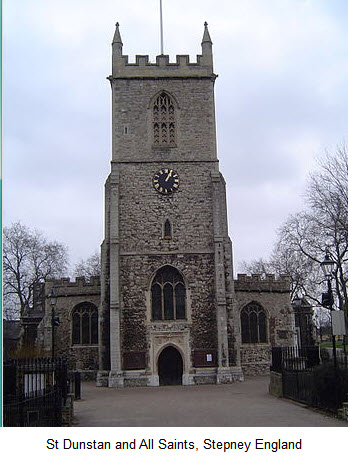 This year's challenge by Amy Crow is another weekly blog, but based on Themes.  Last week, it was Fresh Start.  This week, it's on King - anything related to the word, concept, or ancestral connection.

Background:  My children's father's mother's line, the RICE line, goes back to the 1632 immigrant, Deacon Edmund RICE.  His grandson married Elizabeth WHITE, daughter of Resolved WHITE (who was the elder son of William & Susanna WHITE), an original Mayflower settler.  Um-hm, my ex-husband has Mayflower ancestors in the WHITE family.

But going back a bit further... Resolved WHITE, b. 9 Sep 1614 in Leiden, Netherlands, married first on 4 Apr 1640 in Scituate, Plymouth, Massachusetts, to Judith VASSALL, b. 1619 in Stepney, England, likely baptised in the same church as her mother; Judith was the eldest child of William VASSALL & Anna KING. Ah-ha!  Here's the KING in the family. Whew... bagged one.  The Vassall family had arrived in Massachusetts in 1635, arriving to settle, on the vessel, Blessing.

Anna KING.
We have her baptism record as 1 Dec 1594, Woodham (Woodham Ferrers) Essex, England.  She likely was born within a few weeks of this date, but it is not listed on the record.  It does list her father - George KING, but not her mother. Likely this is because it was common for the mother to have a 'lying-in' for several weeks after the birth, and since she was not present at the baptism, she would not be listed as such. Frustrating, however. A family tree or two online have her mother listed as "Joane". An online index lists details of a likely Joane ROWSE married to a George Kinge as follows: ( Accessed: Ancestry.com. London, England, Extracted Parish Records [database on-line].):

And now doing a smidge of new searching, I find George KING's will, dated 14 Oct 1625, naming his wife as Joane, all three of his sons, listed in order as George, a daughter Judith, and his daughter Anna Vassall and his son-in-law, William Vassall.  Well, well, well. It wasn't posted anywhere last year, but here it is today. From the will one can find that George KING(e) owned several different farmlands and buildings, and also was Yeoman to 'his knight, Sir Arthur Harris'. His marriage lists him as Yeoman as well.

His burial record, in St George the Martyr, Southwark, Surrey, in south London on the south side of the Thames is quite clearly dated 7 Dec 1626, although I see online trees stating his death to be Dec 1625.
The Church Register, "p.187-8, 1626, Burials - December, clearly shows written:

I wonder if this couple teased each other about how a King married a Vassal(l)?

The five children they bore - 3 boys, 2 girls - all seem to have survived to adulthood and I may do a smidge more research on those other children if only to see if any others followed Anna & William over to the new colony in New England.

If you have information or corrections, please do not hesitate to let me know, either by contact through calewis at telus dot com, or in the Comments below.  Thank you so much for visiting and reading this post!

Thought you'd enjoy this one, Lyra! Maybe in 400 years our descendants will be reading about us, eh? Happy Birthday!!