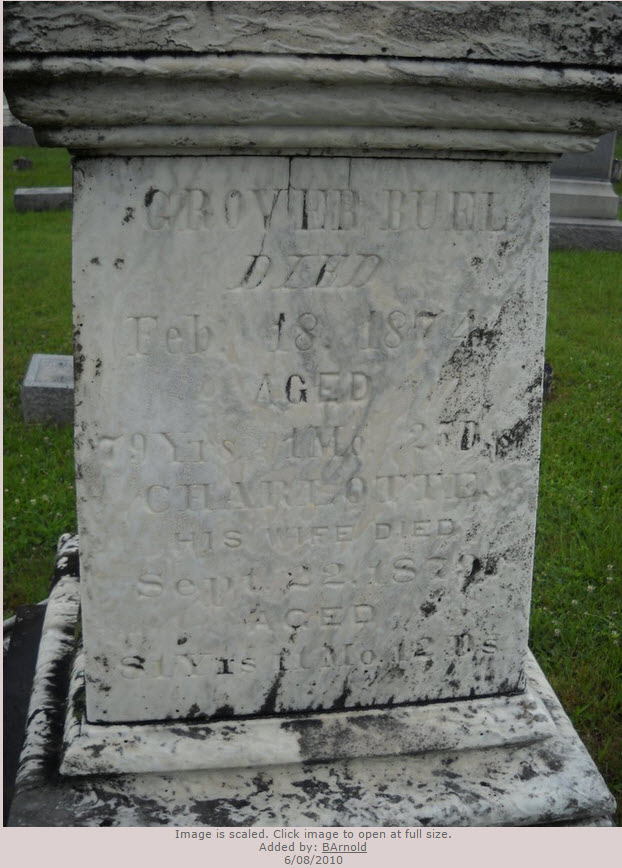 This year's challenge by Amy Crow is another weekly blog, but based on Themes. Last week, it was King.  This week, it's on TOUGH WOMAN. A challenging topic, as I've often thought many of my women ancestors past were tough women to survive large numbers of children, settle in new places, often with limited resources. But I decided to write - once again - about my "most-tough-to-find" woman, Charlotte Bortle.
This will be the third post about her in 3 years... Maybe this year will be the year. You can read more details I've written on my previous two posts, on Feb. 23, 2013, and Aug. 29, 2013.

Charlotte BORTLE enters my life as the wife of one of the several Grover BUEL(L)s in my line - I keep track of them by their birthdates!  She is shown with her children, on censuses, and as the widow when her husband dies, and then finally, she is buried in the same cemetery.  That's it. Nothing more.  The gravestone photo above at right, is from Lysander Union Cemetery, Lysander, Onondaga NY [photo by permission of BArnold]

There is evidence (The History of the Buells in America, her Gravestone inscription) of her birth month and year, and an indication of place on both the 1850 and 1870 Census. This gives us a likely birthdate of 10 Oct 1797, and a likely birthplace of New York... possibly in Northumberland, Saratoga, New York, or in a neighbouring county.

Northumberland was settled during the late 1700s, and "Mr. Buel" arrived after 1790, according to a small history of the region.

Charlotte married Grover BUELL 17 Dec 1814 in Northumberland, implying that her family were living in the region at that time or, before that date.

I have tried to see if the children's names would be clues - she and Grover had 5 children - but the names are common in the Buell line, so this is not much of a clue.

Here's the only odd clue I have:  when she died a few years after her husband, the mortality schedule shows her age, says she was born in New York, and that her Mother and Father were both born in "N.S." - which would be Nova Scotia, Canada.

Nice clue, but so far I haven't found any Bortles of any spelling, in the region known as Nova Scotia.  More research to be done.

Charlotte is my Tough Woman!  But I'm certain that out there somewhere, there is this great little record which gives Charlotte "wife of Grover Buell, born of parents  ____ & ____ Bortle". With many more interesting details about her parents, their occupations, where they came from originally, why they came to North America, and all sorts of fabulous information.

And if Charlotte is a brick wall for you too, or if you have any clues or other details I could use to follow up on, please let me know via calewis at telus dot net, or in the Comments below.  Thanks for stopping by.

I enjoyed reading the "May I Introduce You To..." post on GeneaBloggers! It was very interesting. I've just started doing the 52 ancestors this year and I'm excited to get to the end of the year and have 52 sketches! I'm doing mine more as sketches that I hope to put together in a 2015 book for my family. :) Anyway, I'm thinking about starting my next post on my 'tough woman'... that woman where I'm stuck trying to prove who her father is. I wish women left more clues, don't you? :)