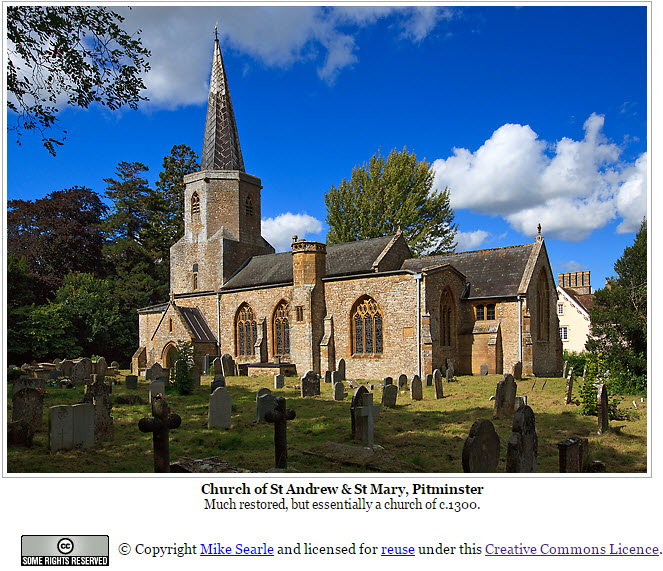 This year's challenge by Amy Crow is another weekly blog, but based on Themes. Last week, it was Tough Woman. This week it's CLOSEST TO MY BIRTHDAY!  And the lucky ancestor closest to my birthday is: Alice GAYLORD/Gaylaud, bap. 10 May 1595, Pitminster, Somerset, England.  See on the right, a gorgeous photo of the Church by Mike Searle, built approximately 1300.

Hugh and Joan Gaylord, the parents of Alice, had five other children.  However, I have not been able to determine if any of them emigrated as well. This family surname is sometimes listed as Gayler, Gaylaud, Gaylord, and other variations. Details of the history of the surname Gaylord may be found here.  This family can trace back another generation as well, Hugh being one of 5 boys of Nicholas GAYLORD & Johane ALVYN, all living in Pitminster.  Hugh died in October 1614 in Pitminster.

Note that the Pitminster parish registers of marriages (St Andrew & St Mary Church) have been transcribed from 1542. Clicking on this link takes you to the Phillimore transcripts, completed in the early 20th Century.

Alice is one of my early settlers to Connecticut from the Pitminster area, arriving approximately 1635-1637 with husband, Richard TREAT (Trott, in England) and their 9 children. Two of their original 11 children had died before they immigrated. Some records state that Richard immigrated on the ship "Mary & John", settling in Connecticut where he had several important roles, e.g., Deputy to the General Court, Magistrate, and was also on Gov. Winthrop's council in 1663-1664. My line goes through their 6th child, the 3rd boy, Robert TREAT, 1625-1710, Governor of Connecticut 1683-98 in two separate terms.

When Richard and Alice TREAT arrived in Connecticut about 1638, their children were between 18 [Honor Treat] and under 1 year [Catharine Treat].  Alice's husband left a sizeable estate when he died, and the family seem to have lived relatively well, with positions showing high social status and recognition.

As is common with the tough women who came with their husbands and children to a new country, very little is known about Alice as a person.  We have her baptism on 10 May 1595, her marriage date of 27 Apr 1615 in Pitminster, her immigration with her husband and 9 living children, and an estimate of her death a year or two after husband who died in March 1668/69 in Wethersfield, Hartford, CT.  I have not found a will for her as yet

I certainly didn't have 11 children, nor travel across the Atlantic ocean in a sail boat with them all, to live in a relatively new community without family support!   We share a birthday, but not many other characteristics.  Alice - I'm pleased to share a birthday with such an intrepid woman.

Wow, that's cool you can go so far back in the past and find Alice! I love the background you use for your blog; what layout is it? I'd love to make one for my blog, or make another blog. Mine is too small and squishy looking. LOL

I agree, really great to find that much information in the 16th century. Another good read!