This year's challenge by Amy Crow is another weekly blog, but based on Themes. Last week, it was Close to Home, and this week it is "Stormy Weather." 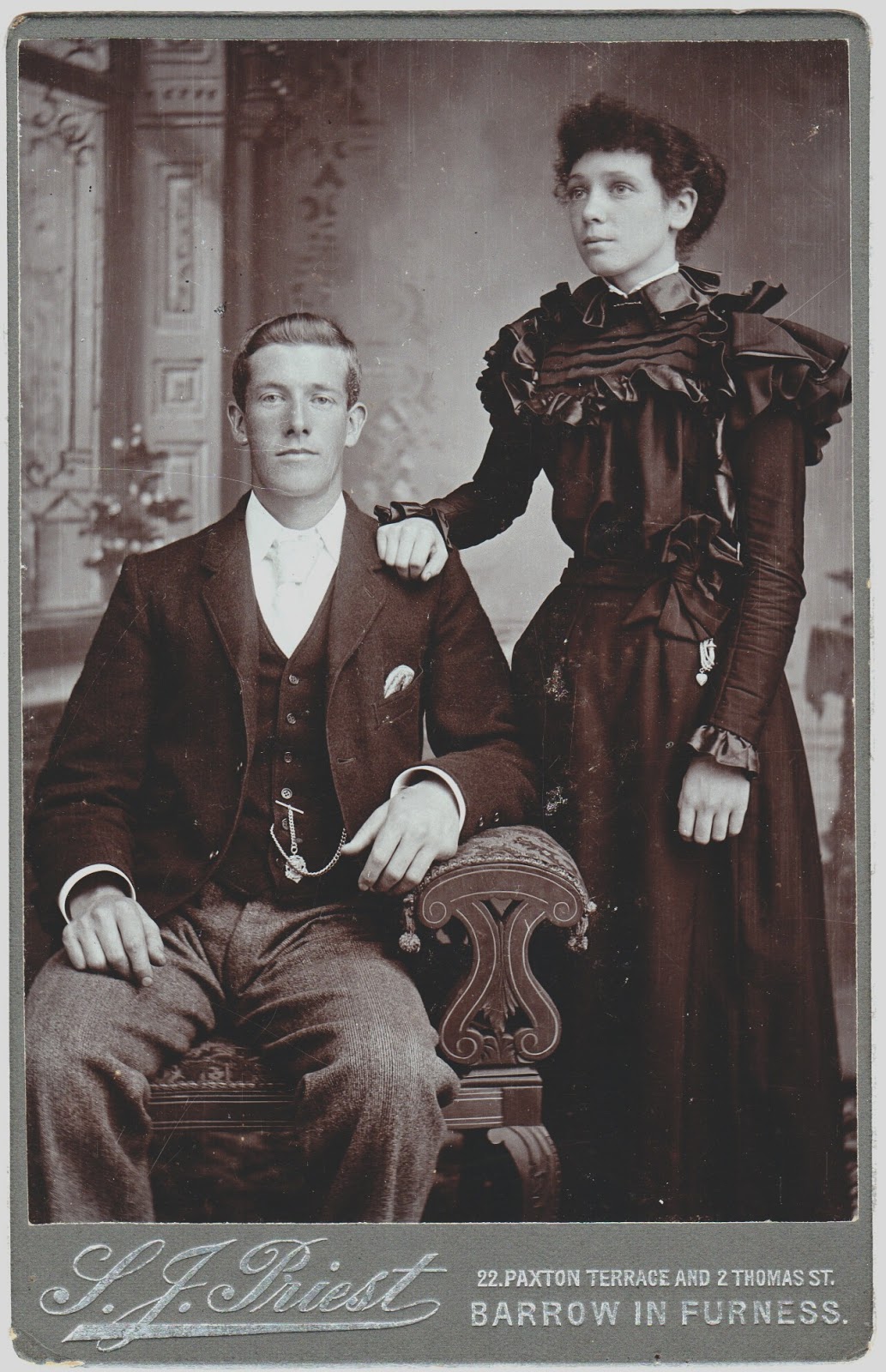 Living on the "wet coast" (BC), we haven't had the stormy weather the eastern states and Canada have had to deal with this winter.  I haven't seen anything in my ancestors' lives to indicate a literal issue of stormy weather, so I'm using a figurative example of stormy weather.

My father's parents were William John GILLESPIE, known as Jack all his life, and Harriette BUNN (photo on right).  Grandpa was born in Augher, Co.Tyrone, Northern Ireland in 23 Aug 1876; Grandma was born in Netherton, Staffordshire, England in 31 Oct 1879.  Both ended up in Barrow-in-Furness, Lancashire, England where their fathers and other relatives were able to find work in the booming economy in Barrow.  Ship-building, steel-manufacturing, and related industries drew workers from far away. 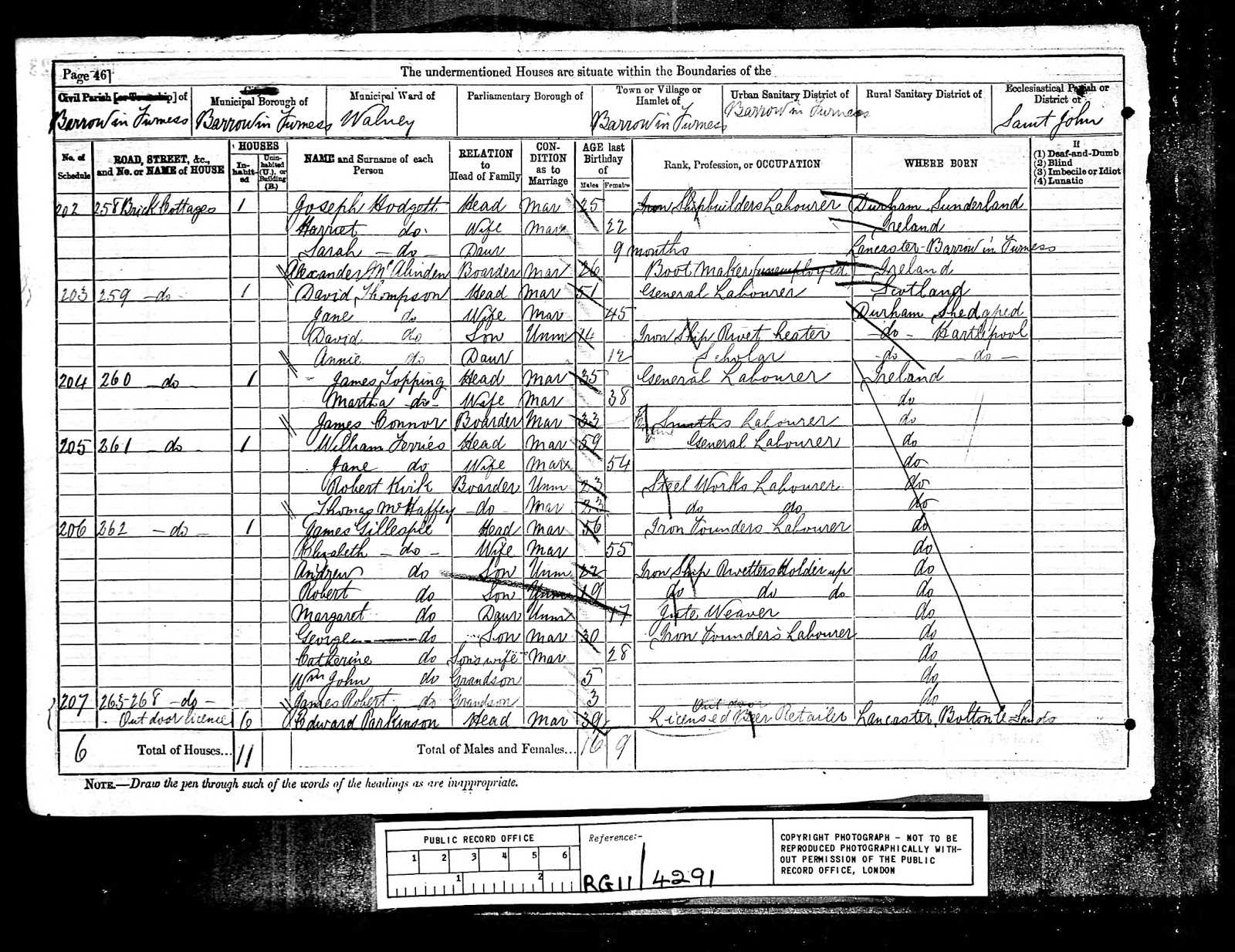 On the 1881 Census in Barrow, my 5 year old Grandpa Jack, his 3 year old little brother Jim, his parents George & Catherine, his 2 uncles Andrew & Robert and his aunt Margaret , and his grandparents James & Elizabeth, all lived in a cottage termed "#262 Brick Cottages".  There were about 300 of these built for the workers, and every family member of working age, worked.

The economy went quite well until into the early 1900s; Grandpa grew up and on the 23rd of May 1899, he married Harriet Bunn, whose parents - following a step-brother/uncle -  had moved up to Barrow shortly after the 1881 Census. The photo you see above is a tintype photo taken in Barrow, and is described in the family as their  "engagement photo".

Around 1905, Grandpa Jack moved his family across Hadrian's Wall and into Scotland, to Cambusnethan (near Wishaw and Newmains), where he worked in the Newmains foundry.  Their 4th child, Beatrice, died of tuberculosis in 1907, aged 3 years. That same year, my father was born, and 3 years later to the day, the youngest Gillespie child, Elizabeth "Lil" was born.   Also in 1907, Grandpa's little brother, Jim (nicknamed "Rusty") decided to go to Canada, and left (with a Bible from Barrow), sailing from Glasgow on 16 Mar 1907, for the port of Halifax, Canada.  Jim eventually settled in Ontario, marrying and raising a family of four children there.

Several years later, England experienced a minor economic depression, and moving to Canada was very attractive for many English (and other Great Britain countries).  Grandpa decided to come to Canada, and left the port of Liverpool on the Empress of Britain on June 2, 1911 with his father-in-law George Bunn Sr., following not only his brother Jim Gillespie, but also his brother-in-law, George Bunn, who was in Vancouver by 1910.  Unfortunately, his father-in-law became sick and returned to Barrow shortly afterwards.  Grandpa travelled on to Vancouver, finding work as a longshoreman.  Although the family story is that his first job in Vancouver was being tagged on the main street (Granville?) for jury duty and being paid for it - his first income!

All very well, you're thinking... but where's the 'stormy weather'?  Grandpa left Barrow  on June 1911, leaving his wife Harriette, and children aged 12-2 yrs old: Elsie, George, Winnie, John, and Lil. They were separated for several years. Years. Not months or weeks, but years. Tough times, I suspect.

And finally, after over three years, Grandpa borrowed money from the Salvation Army and was able to get his family out of England on October 22, 1914.  That's right - 1914. Several months after the start of World War 1.  Stormy weather indeed.  The ship they travelled on  across the ocean was the Virginian, which was immediately refitted for war and sent to the Mediterranean after it returned to Great Britain.

If Grandpa had not been able to pay the fees to bring his wife and 5 children over at that time, they might not have made it across until after the war - another 4 years! 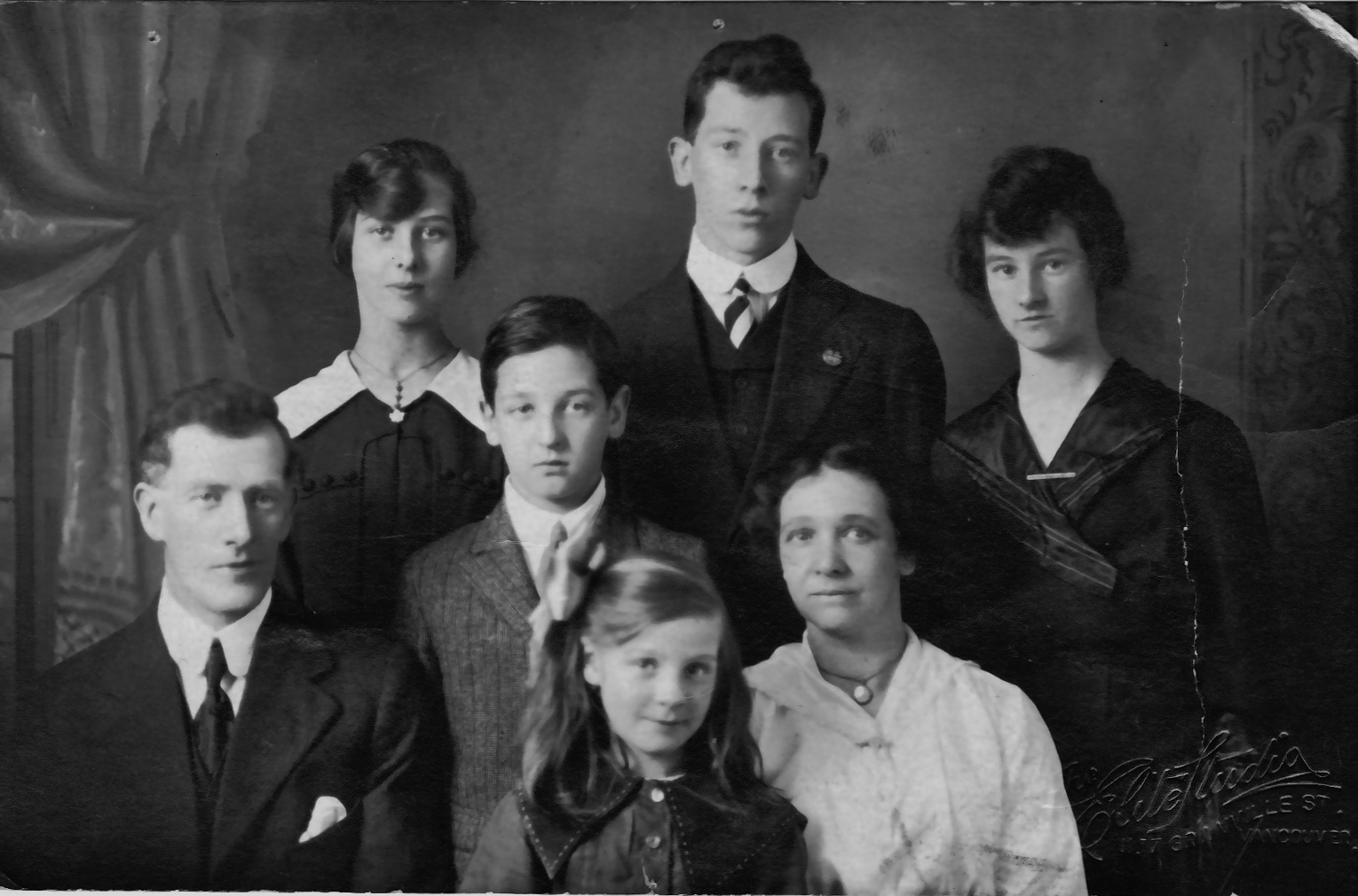 Between the start of WWI and the 3 years since leaving Barrow, the couple went through difficult times, apart. The formal photo here is of the family in 1917, several years after finally settling in back together, in Vancouver BC.

I don't recall anyone in the family talking of this over-3-year's separation period.  But I think it must have been somewhat difficult to be apart this long and then back together again.  Over the next number of years, several others of Harriette Bunn's family emigrated to Canada, coming to Vancouver.

Stormy weather - Marriage can be stormy weather at times, and this period of time must have been challenging for my grandparents, as well as their children.

If you have questions or information, do contact me via calewis at telus dot net, or in the Comments below.  I appreciate any corrections as well.

NOTE: My Blogger account is acting up and not allowing me to reply to comments just now. Assume that I am absolutely thrilled you took the time to come by, read the notes, and comment. You make my day!
Posted by Celia Lewis at 9:47 AM

Celia, I enjoyed reading this post. My paternal grandpa, also John, came to Canada in 1910 and I always wondered why he was the only one in the family to do so. He had 2 brothers and 1 sister that stayed behind. I don't know what became of his parents. I love reading your posts.

Everything you write is so interesting, Celia.

Thanks Loretta & Barbara - I appreciate your comments so much!! I enjoy writing these posts, even though they're a stretch for me.