This year's challenge by Amy Crow is another weekly blog based on Themes. Last week, it was Black Sheep.  This week, the theme is Military, in keeping with the Memorial Weekend events in the USA [I'm Canadian]. 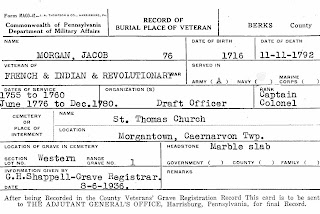 My 5th great-grandfather, Col. Jacob MORGAN, came to Pennsylvania from Wales with his parents, Thomas MORGAN & and Elizabeth ABREY, and his four older brothers, before 1718.  The Morgan family settled near Caernarvon township, in an area which includes the village of Morgantown which Col. MORGAN laid out in approximately 1779, after the Revolutionary War [about 1770, according to several accounts].

Jacob MORGAN was born in Wales on 7 Nov 1716, and in 1739 he married Rachel PIERSOL [1723-1791], daughter of Richard PIERSOL and Bridget BROWN.  Jacob and Rachel had the following children, in Caernarvon PA:

Jacob Sr. amassed a large amount of land over his years, inheriting about 400 acres from his father Thomas MORGAN when he died in 1740.  When Jacob died he owned over 5,000 acres of land.

From 1755 to 1760, he was a Captain in the First Battalian of the Pennsylvania Regiment; later his company formed part of the Second Battalian, in the "Seven Years War" - the French/Indian Wars - receiving 3,000 acres for his service as Captain. He enlisted again in the Revolutionary War, June 1776 to Dec 1780, receiving the title of Colonel.

He was commissioned as a Justice of the Peace and of the courts, during the period between 1764-1784.

"From 22 May, 1777, until 8 January, 1781, he was Lieutenant of Berks County, with the rank of colonel, and as such, was at the head of military affairs in that county, and rendered constant and most valuable services to the cause of Independence."

A year later, on 11 Nov 1792, Jacob died at the age of 76. He is buried in the cemetery of St. Thomas Episcopal Church, Morgantown, Caernarvon township, Berks, PA.

If you have more information on the MORGAN family, including Jacob MORGAN Sr., please do not hesitate to contact me via calewis at telus dot net, or in the Comments below. I appreciate being corrected or having additional sources pointed out!


Blogger is still not letting me "reply" to your comments, for some unknown reason. If I don't reply to your Comment, please know that I'm totally thrilled you came to read my post and commented! You make my day.