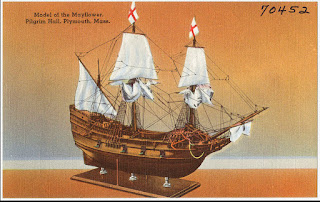 This year's challenge by Amy Crow is another weekly blog based on Themes. Last week, it was Military.  This week, the theme is Commencement / Beginnings:  I've chosen Resolved WHITE.

Time to write about the Mayflower ancestors, eh? Some information may be found on The Mayflower History site, Wikipedia, and the Massachusetts Society of Mayflower Descendants, among other sources.  The image on this page is of a postcard, published by Smith's Inc, Plymouth, Mass., about 1930-1945, displayed in Boston Public Library.

William & Susanna WHITE, and their two sons, Resolved, born in England [direct ancestor] and Peregrine, his younger brother, born in the Provincetown harbour, are on my children's father's lines. They link into the RICE line, first immigrant Deacon Edmund RICE, who arrived in the colony in 1632. Details of the Pilgrim's colony beginnings may be found on many sites, as noted above.

William & Susanna WHITE and 5 year-old Resolved had a very rocky start to their trip to New England. Note that the WHITE couple with their two servants were part of the London Merchant group, which boarded in London, then sailed to Leiden to add the congregation members as passengers. In Leiden, the other ship needed lengthy repairs, and the group in the Mayflower set off finally quite late in the season, early in September.  Here is an excellent set of sketches to show the inside of the ship, Mayflower.

Mentioned above, after arriving at safe harbour in Provincetown Harbour on November 9th, Susanna delivered a second son on board ship, whom they named Peregrine, at the end of November 1620. As all know who learn about the Mayflower group of settlers, their first winter was extremely challenging and approximately half of the crew and passengers died. On 21 Feb 1620/1, William WHITE died, leaving his wife and two children on their own.

Three months later, 12 May 1621, Susanna married Edward Winslow, who had also been widowed, his wife having died two months earlier. It must have been amazingly challenging for this couple to manage. Each had been very recently widowed, and were determined to settle in this new country with extremely limited resources. Susanna and Edward went on to have five children, plus her two earlier children.  Edward Winslow served as Governor, Assistant Governor and, as the colony's agent in England.

Resolved WHITE was born 9 Sep 1614, in England.  By the 1630s, he moved with his stepfather and mother to Marshfield, later moving to Scituate where he was granted 100 acres next to William VASSALL's land.

On 6 Nov 1640, he married Judith VASSALL, whose family (William VASSALL & Anna KING) had arrived in 1635.  William VASSALL was a founder of the Massachusetts Bay Colony; he left the Colony and settled in Barbados - another story altogether!

Resolved and Judith had the following nine children, born and baptized in Scituate:

In 1656/7, Resolved and Judith - and likely, some of their children - travelled to Barbados, likely to aid in the settling of the estate of her father William who had settled there.

Resolved was made a Freeman of Plymouth County on June 1, 1658. By 1670, he was a Freeman of Marshfield.  He was actively involved in the early colony, and was a soldier in 1670, in King Philip's War.

After Abigail's death, Resolved moved back to Marshfield, likely living in the household of one of his children.  He is mentioned in a land transfer of his eldest son, William White, on 19 Sep 1687, and it is suggested that he died within a few years of this date.

Resolved and his first wife Judith are buried in Winslow Cemetery in Marshfield. It is not known where his second wife, Abigail, is buried, nor when.

Blogger is still not letting me "reply" to your comments, for some unknown reason. If I don't reply to your Comment, please know that I'm totally thrilled you came to read my post and commented! You make my day.

Celia, I enjoyed reading your story. As I descend from another of the Winslows, Edward's brother Kenelm, and as the families lived in the same parts of Plymouth Colony, I found it very interesting to see how other family members fared.

I hope that Susanna was happy in her second marriage and didn't choose her new husband based solely on necessity. Very interesting post.