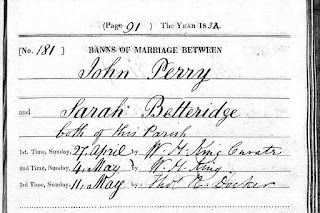 This year's challenge by Amy Crow is another weekly blog based on Themes. Last week's theme was The Old Homestead, and I wrote about the 1738 Terwilliger stone farm house near New Paltz, PA. This week, the theme is Halfway, as we're now half-way through the year.

And this week, I'm barely half-way through my research plans for the couple, John PERRY & Sarah BETTERIDGE!  I'm back at my son-in-law's genealogy line, looking for more details of his 3rd great-grandparents:  John PERRY, Sr., b. abt 1813, Hartshill, Warwick, England, in the Parish of Nuneaton, and his wife, Sarah BETTERIDGE, b. about the same year in Atherstone, Hartshill, Warwick.

We know his mother's name was Elizabeth, as she shows up widowed on later Census records, living with John, his wife Sarah, and children.  I have no information on Sarah's parents, as yet.

As listed in the Nuneaton Parish register, John married Sarah BETTERIDGE, b. abt 1814, Atherstone, Hartshill, Warwick, England, after the 3rd reading of Banns, 11 May 1834. 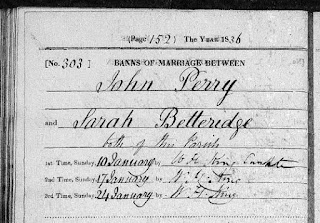 However, for some unknown reason, the same couple seem to have married once more, again after the 3rd reading of Banns, on 24 Jan 1836.  As before, both are "of this Parish" - Nuneaton.

I have no idea why the couple would have married once more... In this small community, I can't imagine there are two individuals with exactly the same names marrying.  I suppose it is possible, but it stretches possibilities. Did they NOT marry after the 3rd reading of the Banns in 1834?  Why not? What happened?  Their first child was born that year...

Regardless of their marriage date, they appear to have had the following children

The 2nd-4th child were baptized at the same time: 26 Apr 1852; whereas the last 4 were baptized a year earlier on 23 Feb 1851.  This is another confusing set of events. Perhaps more research on church records may help make more sense of these dates.  Or, perhaps they baptized them as they could afford to-?  Anyone have more ideas?  The cost of baptizing?  Not the 'right' church?

The 1841 Census in Chapel End, Hartshill shows John and Sarah with their first 4 children, as well as John's widowed mother, Elizabeth Perry, 60 yrs.  Both John, as well as his mother, have their occupation listed as "Ribbon m" [maker]; Sarah is not listed as employed, and their children are listed as Mary 7, Robert 5, Elizabeth 3, and John 11 months.   Note that if Mary is 7, thus born in about 1834, it would seem to indicate the 1834 marriage is valid.

On the 1851 Census [Snowhill, Hartshill], Elizabeth is shown as Head, widowed, 72 yrs old, "Pauper. Former Weaver Ribbons Hand Looms."  Her birthplace is listed as Orton on the Hill, Leicester. A search on the map will show this is only about 15 km north, just across the border.  I'm not certain how I'll find her parents in Orton, but it might help if I can find a marriage record for about 1800...

I have hopes of finding more records, but there are over a dozen items on my research plan for this family. I am walking through Censuses and Parish registers, page by page by page.  John had 3 sons, and perhaps one was named for his own father, so I might focus on those names first.  Perhaps.

By next year, I hope to have more details to add to the PERRY family, and their female lines as well. The BETTERIDGE name is interesting, don't you think?  So many ancestors and ancestresses and so little time!

If you have more information on any of these people, do contact me via calewis at telus dot net, or in the Comments below.  I'm always happy to correct any of my information!

Blogger is still not letting me "reply" to your comments, for some unknown reason. If I don't reply to your Comment, please know that I'm totally thrilled you came to read my post and commented!  You truly make my day.