This year's challenge by Amy Crow is another weekly blog based on Themes. Last week's theme was Road Trip, and I wrote about how my road trip across Canada and back in relation to Expo '67, Canada's Centennial Exposition in Montréal, Québec. This week's alternate theme is MUSICAL.  No professional musicians, no musical groups or traditions... not in our family. 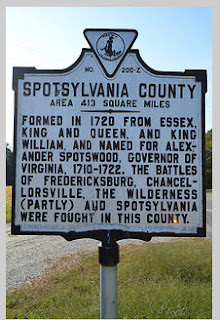 Instead, I decided to write about an unusual name in my children's father's family lines, Taliaferro CRAIG, 1704-1795, in Virginia and Kentucky.  He is the 5th great-grandfather of my ex-husband, in his mother's lines. Known to be illegitimate, his mother - Jane CRAIG - and father - an Unknown TALIAFERRO - were not wed. There is a story of his mother emigrating from Scotland, having a liaison with a Taliaferro man, resulting in a son who carried the Taliaferro name as a given name.

Taliaferro CRAIG, was born in 1704 in Virginia, and although it is said he was born in Spotsylvania county, at that time, the area was not named as such.  His name is often spelled as Toliver or Tolliver.

Although it is thought there were two other children, I have not found confirmation. A "Benjamin" is often added, but he is part of the next generation; another child or two may have died young.  There is a gap between #8 and #9 children, which may point out missing children.

"TOLLIVER CRAIG - HIS NOTEBOOK AND AUTOBIOGRAPHY, edited by
Mary Louise Fricle, route 1, box 91-A, Kingdom City, Mo 65262 (1991).
It is a transcription of an autobiographical sketch written by Toliver Craig the 3rd,
Son of Toliver Craig, Jr. of Scott Co., Ky. and a grandson of Taliaferro Craig and
Polly Hawkins. It begins quite simply:

"My grandfather was the illegitimate son of Jane Craig who was from Scotland
and he married Mary Hawkins by whom he had Twelve Children".

So Taliaferro's illegitmacy is confirmed by three of his grandsons: Toliver and Francis
Craig, and Lewis Sanders."

Taliaferro CRAIG bought and sold quite a bit of land in Virginia, which can be found in land records. Several of his sons also held land by his parcels.  Virginia Land Records provide details of a number of the transactions.

If you have more information on Taliaferro's parents or family, I would be very happy to receive this, including any corrections you may see in the above.  Please contact me via my address below, or via Comments.

Love reading these Celia!!! So Lewis is in the Rice line, long before the Reba Charles connection. So interesting!! So many odd names and interesting tidbits!!! Thank you!

Celia Lewis
Vancouver, BC, Canada
Now retired, I am enjoying exploring my passions: GENEALOGY, Writer, Geology, Marine Biology, Photography, Vegetable gardening, more time with my kids and grandkids. Writer of articles and handouts for Genealogy for Beginners classes, which I teach several times a year. Born and raised here in the rainforest of Vancouver BC Canada. Genealogy blogs (2): "Twigs and Trees", "Terwilliger Souvenir Album".