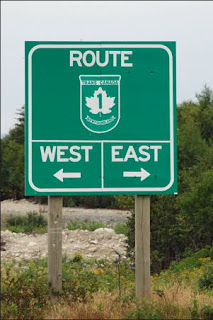 This year's challenge by Amy Crow is another weekly blog based on Themes. Last week's theme was Halfway, and I wrote about how I was half-way through my research plan for my son-in-law's 3rd great-grandparents. This week's theme is ROAD TRIP.

In July of 1967, my then-boyfriend drove across from Vancouver BC to Brantford Ontario.  I had completed one year of work, doing home nursing for the Victorian Order of Nurses (VON), which was a requirement of having received a large bursary for my final year at University of BC, where I received my BScN.   For the first 9 months of my VON job, I worked in and around Leamington Ontario, the southernmost point in Canada,a very tiny town. Leamington was known for its Heinz factory, and for many greenhouses and farms growing produce for the factory.  For my first nursing experience after graduation - it was wonderful!  In this farming community, I had very mixed nursing problems and situations to handle, which made going to work both exciting and satisfying, every day.

Once my boyfriend picked me up in Brantford in early July, we headed immediately to Montréal to Expo '67.  Earlier that year, we bought a 7-day pass for the Expo, and were very excited to be attending this special Exposition.  Unfortunately, we were late getting to our booked camping spot, got thoroughly lost late at night, and ended up in Joliette, a small town 50 miles [70 km] north of Montréal.  With my little bit of French and much non-verbal communication, and good will on all sides, we managed to park our Volvo and home-made trailer by a friendly Québécois family.  Then each day, we would drive down to a subway station, and head to Expo, getting there very early.  As the doors would open, we would race to the particular popular exhibition building we'd decided on. That very early lineup guaranteed we would see all the major exhibitors in 7 days.  After managing to spend several hours at the day's major exhibit, we would wander to see the others, or stand in a much smaller lineup for other exhibits - lunch time was always a shorter lineup.  Canada's amazing pavilion, Russia with Sputnik,  USA with their space program, Britain, Czechoslovakia - wonderful multi-slide show, Iceland - "Land of Fire & Ice", and so much more.  It was all wonderful, exciting, entertaining, and awe-inspiring!

After we'd spent our 7 days there, we started off to go through to the Maritimes. Out of Montréal to Québec City, then further east, over and down to New Brunswick, stopping to see museums, stores, towns, to Nova Scotia.  We absolutely had to drive not just to Halifax (where that awful ammunition ship exploded in 1917), but further west around to Peggy's Cove - the most beautiful little harbour in Canada.  Eventually we wandered back up through the Maritimes, realizing we wouldn't have time to go over to PEI, and definitely not enough time to take the ferry to/from Newfoundland.

Over the next few weeks, we made it across Canada, taking a few side-trips. Whoops - In Bruce Mines Ontario, going over Lake Huron towards Sault St Marie, we needed to get an axle re-welded. Since that took an extra day, I headed over to their little museum, and enjoyed it very much.  I still have the Bruce Mines Cookbook which I bought.  As a mining community, Bruce Mines had a very varied group of families: from Germany, Ukraine, Italy, Poland, England, and more.  Great recipes!

We had wonderful weather as we drove west, although the rainstorm in Saskatchewan was so awful we had to pull over and wait it out.  The rain was so heavy no one could see the road, let alone the car/truck in front!!  Didn't last long, however. Finally, we could see the foothills of the Rockies after passing through Calgary Alberta.  Mountains.  After a year in southern Ontario, I was so starved for mountains!   Driving west through the Rockies was gorgeous, so beautiful and awe-inspiring. I'd taken the train going eastward to Ontario, and had missed seeing most of the trip through the Rockies.

And when we finally got a few miles past Hope, suddenly my whole body relaxed. Ahhhh. Getting down to sea level, mountains to one side, the open Fraser Valley and the mightly Fraser River heading to the sea, and back to Vancouver... Home. Have you had that experience? Feeling your lungs and your skin relieved at finally experiencing that special moment when you are home? Amazing.

We did other road trips in later years with the kids - various 'circle' camping trips around B.C., and one very memorable trip up to Yellowknife... but that's another story.

Blogger - or my computer - is still not letting me "reply" to your comments, for some unknown reason. If I don't reply to your Comment, please know that I'm totally thrilled you came to read my post and commented!  You truly make my day.
Posted by Celia Lewis at 9:03 PM

Loved reading about your experiences as a VON, EXPO 67, and your travels across Canada, Celia. The drive from Hope to Bridal Falls is pretty closed-in, isn't it? I also like how the valley opens up on the approach to Chilliwack and beyond :)

"And when we finally got a few miles past Hope, suddenly my whole body relaxed. Ahhhh. Getting down to sea level, mountains to one side, the open Fraser Valley and the mightly Fraser River heading to the sea, and back to Vancouver... Home. Have you had that experience? Feeling your lungs and your skin relieved at finally experiencing that special moment when you are home? Amazing."

Yes!!! I got that feeling after driving back across Canada alone, once I hit the coast and that blessed moist, soft air after the blast oven of Revelstoke and the rest of the Interior. Also, every time I'm on the ferry home from the mainland, but especially, if I'm driving, that magic moment when my front wheels leave the end of the ferry ramp and touch this island again, and I can draw a full breath again: HOME....aaaahhhhhhh.......... :) A very special feeling, indeed; know JUST what you mean, Celia!