This year's challenge by Amy Crow is another weekly blog based on Themes. Last week's theme was Large Family, and this week is "Favourite Place."  I've chosen photos taken on our front porch - several places, in Vancouver, British Columbia, Canada. 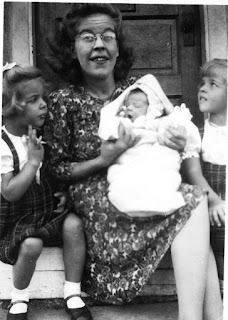 The front porch - however small - was where we had many photos taken.  We always lived in rather small places, which we rented.  One black & white photo is at "KilKare" - my dad's parents' home in Deep Cove, North Vancouver, BC.  The other black & white photos are from 2033 Victoria Drive, at the corner of Victoria and McSpadden.  The Interurban trolleys used to run just down the block, between Victoria Drive and Commercial Drive. The house (and block) are now McSpadden Park, and our house would have been roughly where the sign sits.  The colour photos are from our house at 3250 Matapan Crescent, where we moved in January 1954.

Here's Mom in late August 1946, with 3rd child, Jake, and I can hardly stand not touching my baby brother!  Dad took the photo. 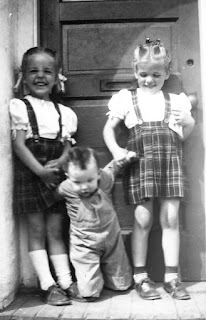 And the following summer, 1947, two big sisters carefully holding onto Jake, as baby brother wants to head down the stairs - now!

I'm on the left, grinning at Dad, who is taking the photo. 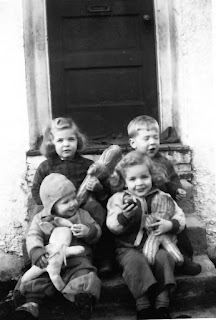 On Victoria Drive again, here's a photo of four cousins:  big sister on top left, cousin Derek on top right, I'm on the right (surprise) holding out a partly eaten apple to whoever is taking the photo, and cousin Wendy is on bottom left watching to see where that apple is going!

Either Mom or my Aunt Barbara took this photo. And I see all the girls have (new?) stuffed dollies to cuddle. It looks as if this might have been taken around late 1945.  Could it have been around Christmas time? 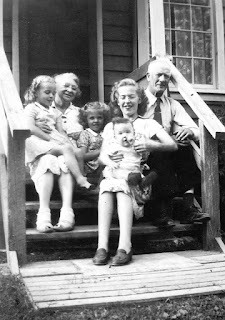 On the right is a photo taken out in Deep Cove, in North Vancouver, BC, roughly early spring 1947. Taken at my grandparents' retirement home, "KilKare" on the steps, I can't think what was the reason for us being there. Perhaps "just visiting." This is another porch which features in many  family photos - all the many Gillespie and Bunn cousins have photos of themselves, family members and other relatives on these steps!

Grandpa Jack Gillespie is sitting on the right behind Mom who is holding baby brother Jake - who was born only 2 days after Grandpa Jack's birthday. I didn't realize this until I started my genealogy work on our Gillespie family. My older sister is sitting between Grandma and Mom, and I'm on Grandma's lap - watching baby brother yet again! 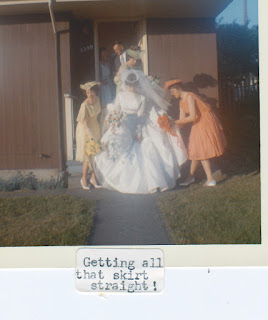 On the left, here's big sister down the stairs, and heading for the car to go to the church for her wedding to Val, her high-school sweetheart.  May 17, 1963.  I'm on the right, Mom and Dad are just behind the group of us.

Wonderful sunshine, and a beautiful day. Very exciting! I'm sorry the photo isn't sharper, it's a little fuzzy, and would need some editing work to bring out the pretty bouquets and details.

The small tag at the bottom was done by Mom, who made all three of us a personal photo album one year for Christmas. And she typed small labels for every photograph in our three albums. 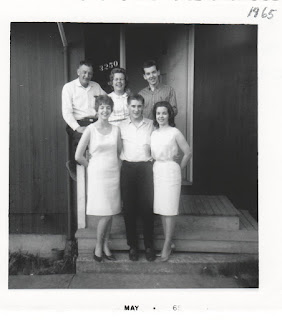 On the left is our home on Matapan Crescent.  Taken in May 1965, this is 3 years after big sister married Val, the good looking guy in the middle!  Mom and Dad are behind us, and baby brother is on the right behind big sister.

Looking at the date, I suspect this was taken at the 'mutual' birthday dinner Val and I often had.  Our birthdays were only 2 days apart, so we would have dinner and cake etc. on whichever days were convenient.


And the birthday cakes - we loved to cut them up in non-traditional ways. Circles, weird shapes, diamonds, whatever we could manage to cut. No tidy conventional squares for us!! Nice memories. 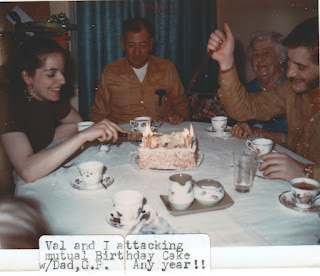 Just for that, here's a photo to give you the idea of how much fun we had cutting!

I'm on the left, Val on the right. Dad is watching us and wondering what on earth we're going to do now, and my mom's mother, whom we called GrandPete, is watching Mom taking the photo.

Mom didn't date this photo but I think it must be around 1970. 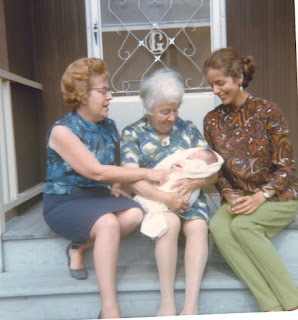 On the right in this July 1968 photo of Four Generations, we're on the Matapan steps again. Notice the new screen door with a big "G" on it?  G for Gillespie. That screen door is still on the house - my brother took a photo of it a few years ago when he was in the area.

Mom is on the left, with GrandPete in the middle, holding my eldest daughter, I'm on the right, just out of hospital, on our way home. Baby's father is taking the photo, I think, although it could have been my Dad. I don't remember who was behind the camera, now. GrandPete is 88 years old in this photo by the way. She died in late 1973.

Front steps. The front porch. They saw many milestones, many children. We gathered there for photos of birthdays, visitors, holidays, celebrations of all sorts.