This year's challenge by Amy Crow is another weekly blog based on Themes, although it seems not always relevant for me to use!  This week the theme is "Sporting" and yet again, I'm not using the theme. But I continue to write about the original settlers in New England, in my mother's family lines. Last week I wrote about Christopher ADAMS & Margaret HUNKING, who settled first in Braintree MA, then to Kittery, (which was officially in Massachusetts not Maine, at this early time). 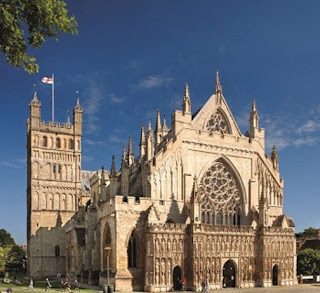 Here is Elizabeth MARSHALL,the wife of well-known gentleman, Thomas TROWBRIDGE. She was the 5th of 12 children of John MARSHALL & Alice BEVYS, from Exeter, Devonshire, England. John MARSHALL was a well-known and wealthy merchant in Exeter, as were the Bevys family. Alice BEVYS' father, Richard, was Sheriff of Exeter in 1591, Governor of the Guild Merchant Adventurers (1594) [I love this name!], Mayor in 1602, dying later that same year.

Elizabeth was baptised 24 Mar 1602 in Exeter Cathedral, Exeter, Devonshire. Her parents are known to be John MARSHALL & Alice BEVYS.  However there is an apparent contradiction in the St. Mary Arches parish register of her 1627 marriage to Thomas Trobrige where she is called "the daughter of Mr. Alec Marshall widow".  This is a mis-transcribing of Alys Marshall (i.e., Mrs. Alice BEVYS Marshall), widowed several years prior to Elizabeth's marriage).

Elizabeth and Thomas had the following children, the first four born in Exeter, Devon, England:

With sons Thomas and William, Elizabeth and Thomas immigrated to Dorchester Massachusetts in 1634.  They had their 5th child, James, in 1636. They moved to New Haven Connecticut in 1639.

Thomas left soon afterwards, likely because of serious political unrest in England including around Taunton, leading to English Civil War, and seiges of Taunton. He left his three young sons, Thomas, William & James, in the care of a fellow Taunton immigrant, Sgt. Thomas Jeffries.  The house, goods, lots, estates and chattel were left in trust with his steward, Henry Gibbons. There were significant problems with the steward's care of the properties, and the three sons finally obtained power of attorney from their father in 1662 - making his property over to them, which gave them the power to lay suit for possession.  Thomas married a second time shortly after returning to Taunton, marrying a first cousin, Francis Godsall, in Feb 1642.

Once again we know very little about Elizabeth, but have quite a lot of information on her wealthy merchant husband.  From the bequests of her father (1624) and her mother, Elizabeth seemed to be favoured with larger bequests than were provided to her sisters.  Some readers of these wills have made the assumption it was because she was unusually helpful, kind or generous.

It is clear that these families -  MARSHALL, TROWBRIDGE, and BEVYS - were relatively wealthy merchants, with active political roles.  Histories of these families are relatively easy to find, and details from the NEHGS provide additional analysis and commentary on the immigrant, Thomas TROWBRIDGE.

If any of you have watched the Who Do You Think You Are television show of model, Cindy Crawford, you would have seen her Trowbridge marvellous long detailed ancestral lines - or at least, you would have seen the small part shown on the show!  This is where she is seen to be related from Thomas TROWBRIDGE up through various gentility to various Counts/Dukes etc., up to the Emperor Charlemagne.

If you know anything more about Elizabeth MARSHALL, I would be so pleased for more details. Contact me at my address at the bottom of the page, or in the Comments section.

Sometimes my Blogger account seems not to allow me to "reply" to your comments. Do know that I value your comments immensely. You make my day! Thanks for stopping by to read my personal genealogy posts.

Very interesting, too bad it took the sons so long to get the power of attorney from their father. The talks that I heard this weekend by Judy Russell were all about the challenges of finding female ancestors in records. So frustrating, but not surprising that you can find more about the wealthy merchant than you can about his wife!

Thanks for your comments, Anna. The reason it took so long is that all 3 of the sons had to be "of age," so they would be legally entitled to this power of attorney.