This year's challenge by Amy Crow is another weekly blog based on Themes. Last week's theme was "Free" but I chose to write about my son-in-law's 3rd great-grandparents This week's theme is "Changes" and I'm stymied once more.  Back to my lines to look for another early settler to North America: Christopher ADAMS, and wife Margaret HUNKING or HAMBURG, both likely b. in England.  These are my 7th great-grandparents on my mother's lines - KUHN-TERWILLIGER.

Christopher ADAMS appears to have settled in Braintree, Massachusetts before 1645. A marriage is listed in Torrey's book on New England Marriages Prior to 1700 as having taken place between 1655 and 1662.  That is, they don't know when!  It seems most likely to be the latter date, however.  His wife's surname has been listed as either HUNKING  or  HAMBURG, forename, Margaret. Her surname still needs to be clarified.

An ADAMS man was involved with a group arguing to be granted a separate town from Boston, first in 1640 - Henry ADAMS. This could have been Christopher's father or other relative, but is not yet proven.  Again, a few years later, in 1645 an additional petition was denied as to building a new plantation where "Gorton and his companie had erected two or more houses," Gorton having left the colony, and the various other adventureres having left also.  In that second petition group were six ADAMS men:  Christopher, Henry Sr., Henry Jr., John, Samuel, and Thomas. This would seem to indicate that Christopher was of age by that date, e.g., born in the early or mid 1620s.  Again, more research is needed to clarify these names and relationships.

The ADAMS couple moved to Kittery, at some point after the above Braintree petitions, and remained there until their deaths. Christopher and Margaret appear to have had the following children, listed on Christopher's will of 13 Jan 1686/7, born in either Braintree or Kittery:

Christopher had a fairly large acreage of land, and his will inventory includes several distinct pieces; total inventory was £621:7:00.  He lists the above children on his will, but no grandchildren. He also provides for his wife, Margaret with house, lands, orchard, etc. There is an attestation on another page with more inventory, by Margaret, agreeing it is a true/accurate inventory. 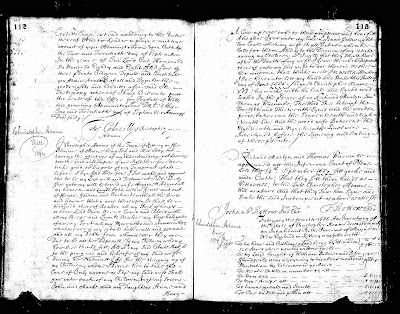 Margaret continued to live in Kittery after Christopher's death. On 30 Jun 1720, she made out a will in detail, listing her children, but not Mark.  She also listed many grandchildren, with surnames... Ah yes, more research to complete.  Probate was 23 Jan 1722/23.  The final inventory was returned 30 Jun 1723, totalling £818.  While Christopher's will was the original image, Margaret's is a transcribed/typed published account. Easier to read this, but I would love to see the original handwritten will.  [Both wills are availabe to view on Ancestry, in Massachusetts Wills.]

As you can see, I have a great deal more research to do to flesh out this ADAMS couple and their children.  Land records have yet to be clarified... there are several of the same forenames living in both MA and ME.  However, it is always a treasure to find wills and probates with children's names and grandchildren.

If you know anything about Christopher & Margaret ADAMS, in early Braintree and Kittery, I would be so pleased for more details. Contact me at my address at the bottom of the page, or in the Comments section.

Sometimes my Blogger account seems not to allow me to "reply" to your comments. Do know that I value your comments immensely. You make my day! Thanks for stopping by to read my weekly post.